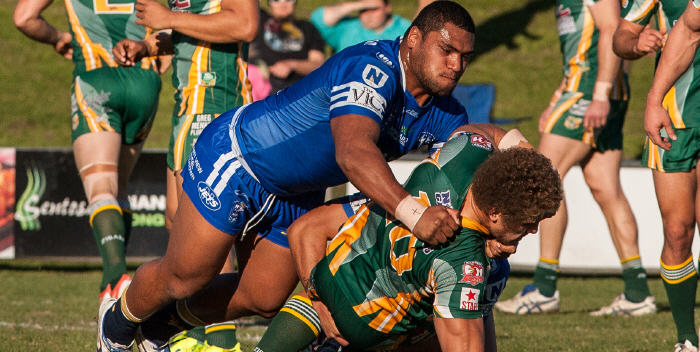 Report on the 20th round NSW Cup match between Newtown and Wyong, played at the Morry Breen Oval on Sunday, 26th July 2015 by Glen ‘Bumper’ Dwyer.

Newtown Jets place in the NSW Cup top eight was further imperilled by their emphatic 52-14 defeat at the hands of Wyong last Sunday. Newtown was still in the game at half-time when the Jets trailed 22-10, but the Sydney Roosters partnership club scored five tries to one in the second half. Newtown’s prospects for next weekend weren’t improved by a series of injuries incurred last Sunday, as well as the probable changes to be made to the Cronulla Sharks NRL squad.

The Jets began this away game confidently, with centre Sami Sauiluma scoring an unconverted try in the sixth minute. The Roos asserted control and opened up a 22-4 lead, scoring four tries in the space of twenty minutes. Newtown lost experienced backs in Mitch Brown and Blake Ayshford with injuries in the first half, although Ayshford gamely returned to the fray in the second session. Sami Sauiluma’s second try and Todd Murphy’s conversion kept the Jets in the contest at 22-10 down at half-time.

Wyong virtually sealed the outcome with two more converted tries in the third quarter, extending the Roos’ lead to 34-10. Jets winger Nathan Gardner raced away to score fifteen minutes out from full-time, missed another scoring opportunity and then was assisted from the field with a leg injury. Wyong completed what had become a rout by scoring three converted tries in the last ten minutes.

Jets coach Greg Matterson was completely frank in his post-match assessment. He regarded this display, especially late in the second half, as being unacceptable and that a number of the more experienced Newtown team members needed to take greater responsibility for their own performances. The Jets completion rate had been particularly poor in the first half and improved marginally in the second. There had been too much dropped ball, forced passes and bad end of set options taken. Fundamental errors such as being tackled into touch and erratic off-loads had no place in a higher standard competition such as the NSW Cup.

The hard-working backrower Tinira Arona was Newtown’s best player, and he has added clever ball-playing skills to his repertoire in recent seasons. Giant front-rower Saulala Houma was also prominent but marred his performance with some over-adventurous off-loads. Fullback Mitch Brown was in excellent form prior to being forced out of the game with a leg injury. The Jets coaching staff ruefully observed that this had been Newtown’s sixth road trip for the 2015 season, and all have ended in defeat for the Royal Blues.

Newtown’s quest for a finals place doesn’t get any easier this coming Saturday, and the likelihood of enforced team changes will further complicate matters. The Jets are back at home again this Saturday (1st August) to the joint competition leaders, the Stacey Jones-coached New Zealand Warriors. This 21st round NSW Cup match at Henson Park is timed for a 3.00pm kick-off.