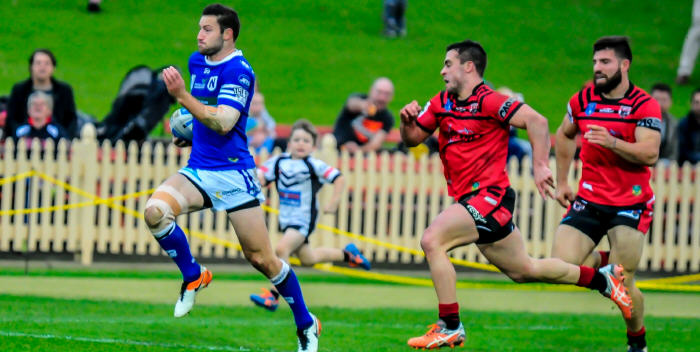 Newtown Jets fullback and captain Mitch Brown sprints away from two North Sydney pursuers for a vital try in the 54th minute of Sunday’s game. Surely the ball-boy in the background doesn’t think he can catch Mitch! Photo: Gary Sutherland Photography.

Details of the 19th Round ISP NSW match between Newtown and North Sydney, played at North Sydney Oval on Sunday, 17th July 2016 by Glen ‘Bumper’ Dwyer.

Newtown defeated North Sydney 32-14 at North Sydney Oval on Sunday afternoon, but had trailed the Bears 14-0 after 30 minutes and 14-6 at half-time. Two converted tries and two penalty goals put the Jets in front 22-14 in the 67th minute, and they finally ensured this much-needed win with a try in the 76th minute and another right on full-time.

Other Round 19 ISP NSW results:

Wests Tigers and Wyong had byes.

How the NSWRL reported on the match at North Sydney Oval:  http://www.nswrl.com.au/news/2016/07/17/jets_delayed_flight_.html

More information about the Beer, Footy and Food Festival at Henson Park on the same day that the Newtown Jets host Penrith, Saturday, 30th July:  http://www.newtownjets.com/beer-footy-food-festival/

Norths get a repeat set in the 5th minute

Piki Rogers scores in the next set, converted by Eli Levido

The Bears look energised and determined

Mitch Brown knocks on in the 8th minute

The scrum is set 15 metres out from Newtown’s line

Bears put up kick into their left-side corner, ball is tapped back inside to Latrell Robinson who scores

Josh Cleeland goes close but unable to control the ball

Newtown is conceding too many penalties

Jets make a break up their left side, Jordan Drew sends Matt Evans in to score to the left of the southern-end goal posts (36th minute)

Jets coach Greg Matterson is in full voice at half-time

Only started to compete hard late in the first half

Need to be the first to score and work their way back into control.

Jordan Drew is finished for the day – shoulder injury

Newtown starting to get a few off-loads going, play is mainly at Norths end

Norths knock on a high kick from Cleeland

Jets defend a set at their end in the 62nd minute

Jets on the attack again at Norths end

Jacob Gagan scores in the next play (79th minute)