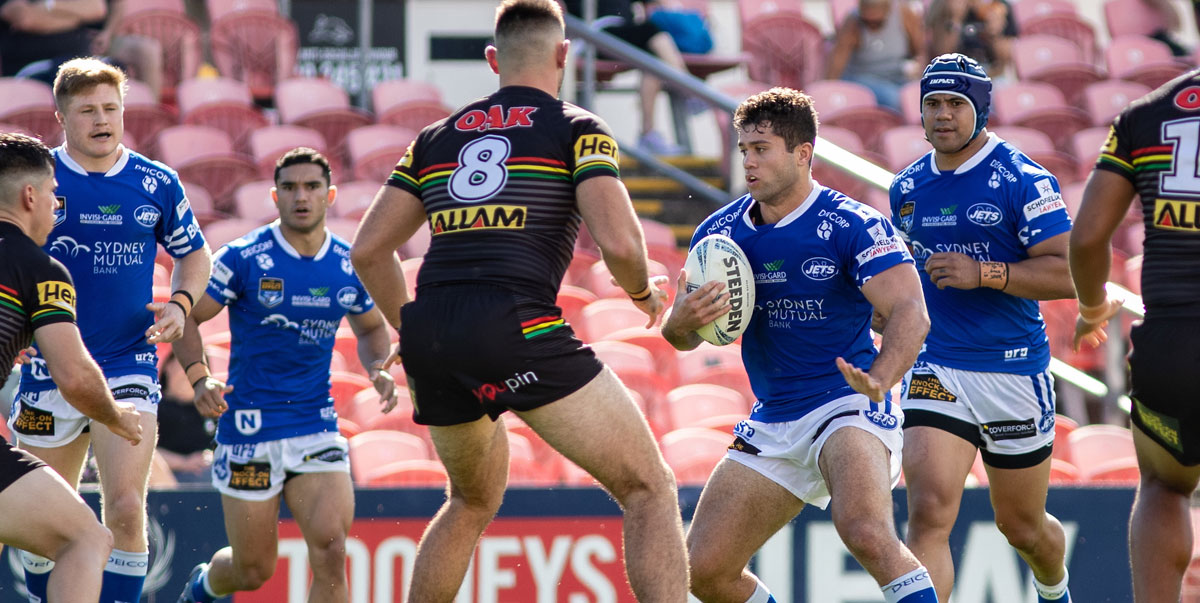 Panthers go on a Second-Half Rampage

Both the Newtown Jets and Penrith Panthers went into this Knock-On Effect NSW Cup ninth round fixture with drastically-changed team line-ups. COVID-19 regulations meant that neither side was able to include any NRL full-time squad members. The Jets made late inclusions by drawing on players from both the Glebe Dirty Reds Ron Massey Cup and the Cronulla Sharks Jersey Flegg squads.

Newtown began confidently and ran up a 14-0 lead after 24 minutes, with tries to Bronson Garlick, Edward Aiono and D’Rhys Miller. Penrith, the unbeaten NSW Cup competition leaders, hit back with two converted tries for Newtown to take a 14-12 lead into the half-time break.

The Panthers took control of the game immediately after half-time when they laid on three converted tries to break away to a 30-14 lead. Bronson Garlick scored his second try in the 57th minute, but Penrith added three more tries to run out winners by 46-18. Coach Greg Matterson noted the disruption arising from putting together a greatly-changed team at short notice, but he further observed that this applied to Newtown’s opponents as well. Matterson said he was disappointed with the lack of defensive commitment shown by the Jets in the second half.

Coach Matterson commended the contributions made by the Glebe Dirty Reds players (Honeti Tuha, Eli Roberts and Wyatt Rangi) and the Cronulla Sharks Jersey Flegg youngsters (Thomas Rodwell, Tyler Slade, Jesse Colquhoun and Kade Dykes) who had all been drafted into the Jets team at the eleventh hour.

Newtown’s next match is an away game against the Newcastle Knights, a match due to have been played in round two but was postponed because of heavy rain. This match against the Knights is set down for Saturday, 15th May, with the venue and kick-off time to be announced early this week.