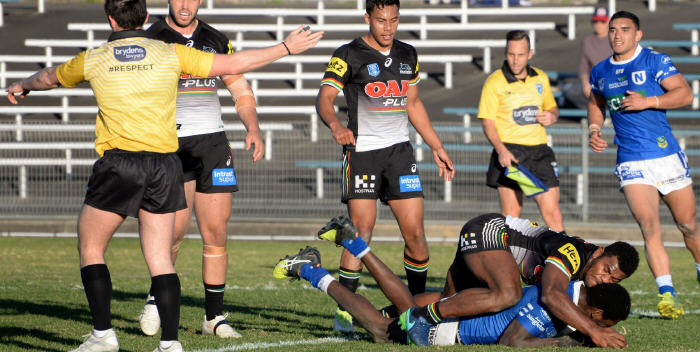 Newtown centre Edrick Lee is across the line in the 71st minute of the game for his second try – but referee Brady penalises Newtown for shepherding. Jets winger Tyla Tamou is also in the photo. Photo: Michael Magee Photography

Details of the 23rd Round ISP NSW match played between Newtown and Penrith at Henson Park on Saturday, 12th August 2017.

The Panthers showed they are going to be strong contenders for this year’s Intrust Super Premiership title, after beating Newtown 46-10 at Henson Park on Saturday afternoon. The Jets competed well for most of the first half and scored the first try in the second, but the Panthers took advantage of any handling errors and penalties conceded by Newtown.

Newtown kicked off and were running to the northern end.

2 penalties in quick succession to Newtown.

5th min: Direct passing and determined running up the left side attack and Edrick Lee scores 5 metres in from the NW corner

Penrith look dangerous up their left-side attack in the 12th minute, but eventually tackled into touch

Newtown defence is meeting any challenges at this stage

Jason Schirnack gets attention for a leg injury but stays on

Converted by Nicholls 6-all after 25 minutes

Jets push Penrith player into the in-goal but the Newtown chasers are ruled off-side.

29th min: Jets lose the ball 30 metres out from their own try-line

The Jets are going to pay dearly for this error.

Converted from the sideline by Nicholls. Penrith 12-6 (33rd minute)

Now Penrith get another penalty right on Newtown’s try-line. Panthers opt for the tap.

Penalty to Newtown in 36th minute is a relief

Jets lose the ball in the next set, putting horrific pressure on themselves in 37th minute

Newtown has been severely punished for handling errors and penalties

40th minute: Try to Penrith as they slice through Newtown’s right-side defence

Try in SE corner is converted from the sideline

Desperation defence by the Jets on their own line

Forced into a goal-line drop-out in 49th minute

He is run down from behind by Edrick Lee, much to the delight of the Newtown home crowd

(Coleman incidentally is the son of Souths great Craig Coleman, who was watching from the hill end).

70th minute: Kurt Kara is hit high around the head by Kikau

71st minute: Edrick Lee gets across the line but the Jets are penalised for shepherding.

Penrith breaks through dispirited defence and score in NW corner