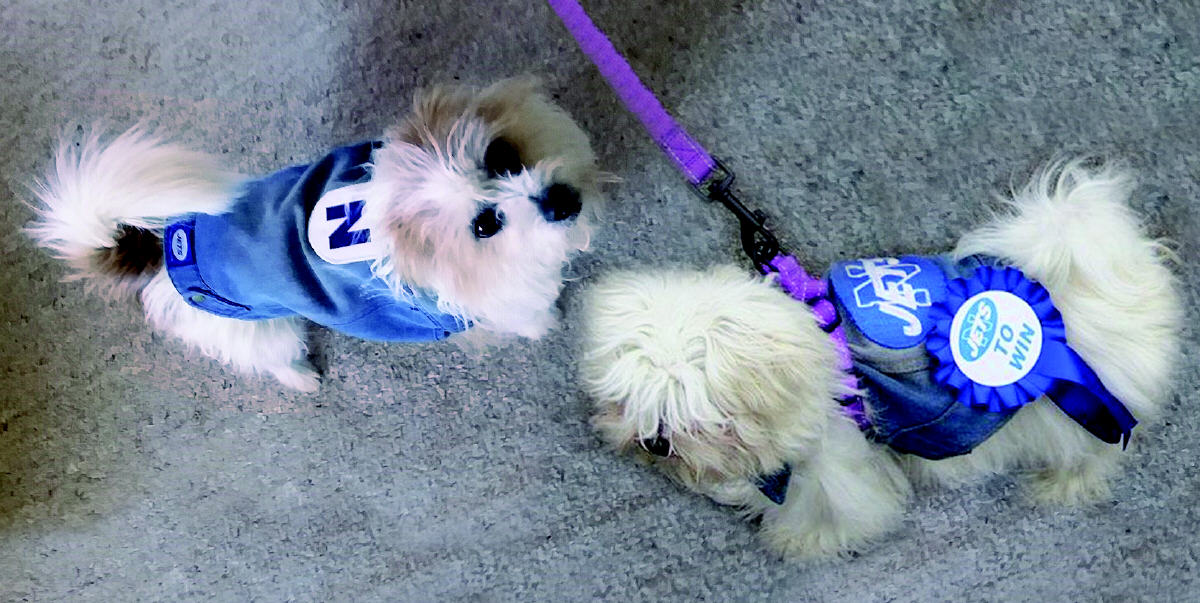 Sparky (on the left) and Takisha are both fully signed-up members of the Keep the Jets Flying campaign. The owners Allan Scott (Sparky) and Kim Fuller (Takisha) confirm that both of these trusty canine pals are very keen Newtown Jets supporters. We renew our invitation to all Newtown Jets pet owners to bring their friends on board the special membership campaign. Whether you own a gnu, a shrew or a kinkajou, they are all welcome to join this mighty quest to keep the Newtown Jets in rugby league! Photo: Images supplied by Allan Scott and Kim Fuller; art work by Ryan Withers.

Please continue your support for the Keep the Jets Flying campaign!

There has been a reasonably good response to this Newtown Jets fund-raising campaign, but we urge you to encourage lots of other people to get on board and help sustain the Newtown RLFC through one of the most critical phases of this old club’s recent history.

Our competition, the Canterbury Cup NSW has been cancelled and there will not be any further games played at all in 2020. This is especially disappointing given our great start. Our players put in an enormous pre-season which was reflected in our Round 1 performance.

The season’s cancellation represents a total wipe-out of the club’s main source of income, revenue from home games played at Henson Park. This enormous financial dislocation represents a genuine threat to the Newtown club’s ability to survive into the future.

Our club is committed to meeting its obligations to our players, suppliers and staff. Our fixed liabilities mostly occur at the beginning of the season and are substantial.

We are currently doing everything we can to minimise expenditure and sincerely thank our loyal sponsors for sticking with us, but now more than ever we need our members, supporters and friends to do the same to help our club survive and ensure we return in 2021!

We call upon Newtown supporters everywhere to contribute $100 to become a Keep The Jets Flying member. You will receive a unique package of memorabilia that will last a lifetime, one that will enable you to relive one of the greatest years in our club’s history. You might not be able to watch games this year but you can relive the glories of last season with this package.  JOIN HERE

Royal Blue Legends Club, Bluebags Season Pass & Family members will automatically receive the package as part of your membership. All other 2020 members will receive the Keep The Jets Flying Digital Print and be eligible for the whole package by contributing the balance between $100 and your existing membership.

We will also continue to roll out exclusive offers to all our members throughout the year, so get on board!

We recognise not everyone can afford to assist financially during these extremely challenging times but, you can help by encouraging your friends who can to join us.

Our hard-working archivists have come up with another remarkable narrative from Newtown’s storied past for you to watch this Saturday afternoon.

At 3.00pm on Saturday, 16th May tune in to JETS TV on www.newtownjets.com and follow us on www.twitter.com/newtownrlfc . Marvel as we travel back 39 years to when the fearless Jets headed north into Bjelke-Petersen’s Queensland for a midweek Tooth Cup game to take on the might of a Combined Brisbane side that was a virtual Queensland State of Origin team

This game was a night match played at Lang Park on Wednesday, 29th April 1981 between Combined Brisbane and Newtown. Because of an industrial dispute in the airline industry, there were no commercial flights operating between Sydney and Brisbane. The Newtown team and staff flew to Brisbane earlier that day in a privately-chartered rattle-trap DC3 that had reputedly been used in New Guinea in World War II. It was described as the flight from Hell and was hardly the best pre-match preparation for a game against a very strong Brisbane team at home in their infamous Lang Park cauldron!

The Combined Brisbane line-up contained an array of names who would be key players in the Queensland State of Origin teams that dominated the interstate series between 1981 and 1984.

Many astute judges rated this Jets-Brisbane match as John “”Chicka”” Ferguson’s “breakout” performance in 1981. Remember that “Chicka” had been the last “imported” player permitted to be signed in the imported recruitment quota for 1981. Imagine if Newtown had declined to sign John Ferguson – it would have been a monumental recruitment “howler” on the same scale as Decca turning down the chance to sign the Beatles!

Our members are the cornerstone of this great club. By becoming members they have shown they are more than just supporters and are an invaluable part of the Newtown family.

To thank our members for sticking with us through these unparalleled times we’ve introduced our Members Badge Draw which will be drawn every Thursday.

This week’s prize is a $100 voucher from THE HENSON, a Newtown Jets cap plus two Jets stubby holders.

And the winner this week is: Graeme Wood, Membership Number 26

As always, there are some great buys to be had when you check out the Newtown Jets clothing and merchandise website on:  www.newtownjetsclothing.com.au

You can also purchase Jets merchandise by calling 9052 6980 during ordinary business hours.

The favourably-reviewed and updated Newtown RLFC history, Taking It To The Streets – The Second Life of the Newtown RLFC, can be purchased online by going to:

You can also buy this book by calling 9052 6980 during ordinary business hours.

Through Blue Eyes – A Pictorial History of Newtown RLFC, the 2008 centenary publication authored by Terry Williams, is still in stock and is available at a discounted price on: www.newtownjetsclothing.com.au and by calling 9052 6980.