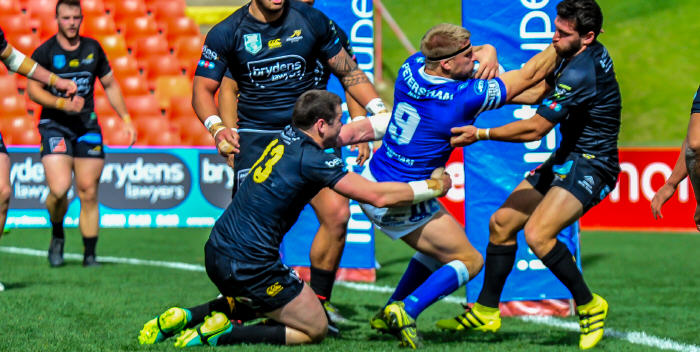 No player tried harder for the Newtown Jets in Saturday’s Qualifying Final than did hooker and captain Matt McIlwrick. Photo: Gary Sutherland Photography

Qualifying Final One: The Jets find the Minor Premiers a tougher proposition

Newtown was well beaten by Mounties 30-12 in the First Qualifying Final at Penrith yesterday, but they live to fight another day. The Jets will play the New Zealand Warriors in an elimination semi-final at Penrith next Sunday, 11th September, with the kick-off at 6.35pm. (This game will be shown live on Fox Sports).

This match will be shown live on Fox Sports.

(Canterbury-Bankstown and Penrith have been eliminated).

The timeline for Saturday’s game:

Mounties kicked off to the Penrith Paceway (northern) end of the ground.

Both Houma brothers looked impressive running on to the ball in the early minutes.

6th min: Jarrad Kennedy makes a break and sends Zac Santo in next to the posts.

Poor numbering up by the Jets.

Newtown has plenty of possession but not making much headway.

15th min: Jets penalised for obstruction and denied a try.

Jaline Graham penalised for a high shot which was debatable.

23rd min: Great offload by Lima to Shaun Fensom who sends Scott Sorenson over near the posts.

28th min: Lima takes on the line and gets another good offload away.

Leading try-scorer Kato Ottio has plenty of work to do but scores in the north-eastern corner.

31st min: Ottio is injured and is carried from the field.

34th min: Malakai Houma charges down a kick and recovers the ball.

Matt McIlwrick goes himself and scores next to the right-hand southern upright.

Jarrad Kennedy and Scott Sorenson have been effective for Mounties in the first half.

Malakai Houma has been one of Newtown’s best forwards.

Mounties dominated in the first 30 minutes.

48th min: Jets lose the ball on tackle one at their end, the last thing they needed.

Nu Brown reads the Mounties kick into the in-goal and gathers it in safely.

54th min: Fensom pops a pass and Santo scores his second try, 15 metres in from the eastern touchline.

Matt McIlwrick is giving a very strong display for Newtown.

59th min: Travis Robinson goes close but tacked out in the north-west corner and is injured in the tackle.

Jason Schirnack has been another hard worker for Newtown.

69th min: Mounties force a repeat set when Newtown grounds a Mounties kick in the in-goal.

Lima does another good offload but the pass is ruled marginally forward.

A most convincing win by the Minor Premiers who advance to the Preliminary Final.

Newtown survive to go into an Elimination Final situation against the New Zealand Warriors next Sunday.