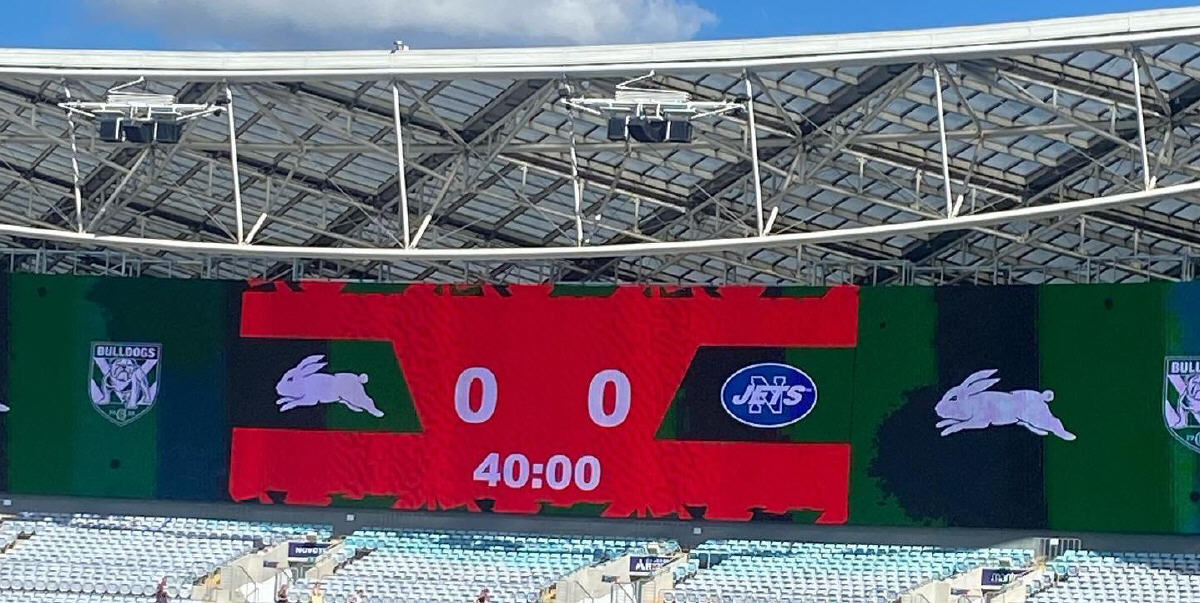 Here’s the new southern-end scoreboard at Accor Stadium prior to the kick-off of the Souths-Newtown match.

The Newtown Jets’ perfect start to the 2022 Knock-On Effect NSW Cup season has come to an end after they were toppled 32-10 by the South Sydney Rabbitohs.

The Jets were dealt an early blow when key forward Franklin Pele pulled up injured after a big run and although he recovered, he was not as effective.

The Bunnies raced away to an explosive start as they kicked off to a 10-0 lead early on through tries to Tyson Hodge and Jaxson Paulo.

The ladder leaders responded when a great run by centre Kayal Iro resulted in a try to five-eighth Kade Dykes. From that point on though it was just one-way traffic with the Rabbitohs posting three consecutive tries for a 26-6 lead at half-time.

The Jets goal-line defence was being regularly tested when Jaxson Paulo picked up his second try off a deft Dean Hawkins grubber kick.

Yileen Gordon (29th minute) and Izaac Thompson (39th minute) both scored to put Souths in a commanding position at halftime, with the result seemingly beyond Newtown’s reach.

Gordon’s sin-binning in the seventh minute of the second half threatened to derail Souths’ good work when Kayal Iro stepped through to score in the following set. However, this proved to be the Jets’ last try for the match with Shannon Gardiner ultimately sealing the result for Souths ten minutes from full-time.

The Jets were missing some experienced players, and the Rabbitohs backline took advantage of that. Newtown’s overall defence was a concern in this match although it improved in the second half.

Just a minute into the match a bulldozing run from rampaging prop Franklin Pele looked to be setting up a great opening set for Newtown. However, Pele’s injury halted play and his impact was limited following this. One of the key forwards in the Jets’ pack getting injured appeared to affect their momentum.

The win was a big turnaround for Souths following their defeat to the Dragons last week. They face the bottom-placed Wests Magpies at Lidcombe Oval on Sunday while the Jets host the Blacktown Workers Sea Eagles at Henson Park on Saturday at 3.00pm.

Next Saturday, 23rd April, is also the day for the rescheduled Beer, Footy & Food Festival at Henson Park!