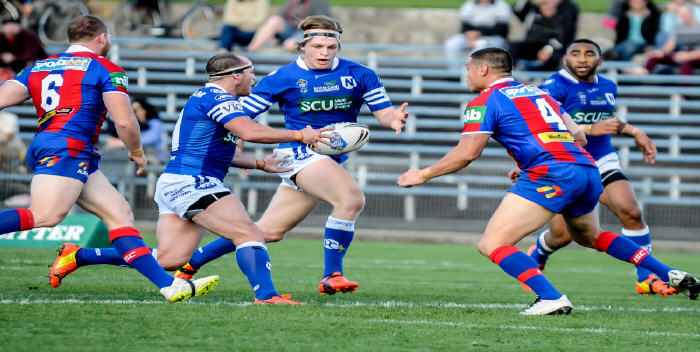 Newtown Jets wily hooker Heath L’Estrange gets his pass away to the fast-supporting Jack Siejka at Henson Park last Saturday.

Report on the Round 14 NSWRL VB NSW Cup match between Newtown and the Newcastle Knights, played at Henson Park on Saturday, 14th June 2014.

The Newtown Jets dropped two valuable competition points when they lost 28-26 to the Newcastle Knights at Henson Park on Saturday. A win to the Jets would have given them a five points buffer zone over the Knights on the competition table, but Newtown now clings to eighth place with the Knights just one point behind. Newcastle led 16-10 at halftime and the Jets staged an exciting but ultimately unsuccessful late rally in the last ten minutes of the game.

The Jets fielded a considerably changed and weakened team from the line-up that had performed with such heroics against North Sydney on the previous Sunday. The Knights scored an early try through a kick in behind the Newtown defensive line that was virtually unchallenged. Newtown responded when Jack Siejka, making a popular return from injury, grounded the ball after Heath L’Estrange had grubber-kicked into the Knights’ in-goal. Newcastle extended their lead to 16-6 through two soft tries that should have been repelled by the Jets defence.  A try to David Harris just before halftime put Newtown 16-10 in arrears at the break. Sio Siua Taukeiaho’s conversion attempt from wide out slammed into an upright and bounced away.

The Jets made several handling errors early in the second half that gave the Knights good field position, but the Novocastrians in turn were guilty of errors that cost them scoring opportunities. Heath L’Estrange was the mastermind of a phase of attacking play that ended in Kurt Kara scoring wide out to bring Newtown to within two points of the Knights.

Newcastle scored two converted tries through kicks that extended their lead to 28-14 with eleven minutes to play. The Jets saved their most inventive attacking form for that last desperate ten minutes. Matt Evans scored in the left-side northern corner after the ball was shifted quickly through several pairs of hands, and Rhyse Martin’s conversion from the sideline made it 28-20 to the Knights. The Jets scored a try with just four minutes remaining that would have gone down a treat on a Channel 9 or Fox Sports video replay. David Harris toed the bouncing ball into the Knights in-goal where Brett Lane won the race to the ball just before it crossed the dead-ball line. Lane cleverly flicked it back for Samisoni Langi to force the ball and claim the try. Rhyse Martin’s hurried conversion put Newtown within two points of a thrilling come-from-behind victory but good fortune and time ran out for the home team.

Jets head coach Greg Matterson noted after the game that this defeat had certain similarities to other lost opportunities earlier this season. The team changes left the pack with too few big props and too many back-rowers. The Jets had lacked composure when attacking at the Knights end of the field and took the wrong options on the last tackle on occasions. There had been some mixed performances from several players, with the good aspects of their game marred by errors or missed tackles.

Newtown plays away next Saturday (21st June) at Leichhardt Oval, where the Jets have a 3.00pm appointment with the third-placed Wests Tigers.