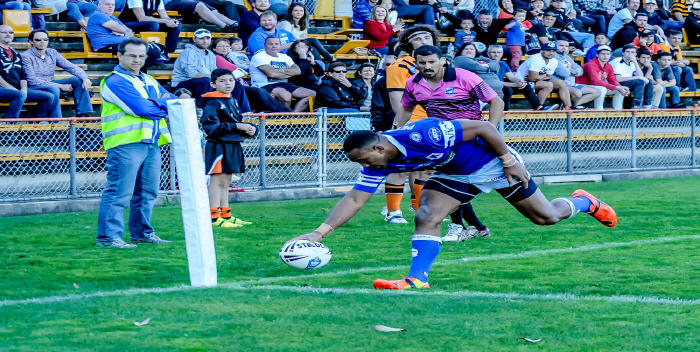 Report on the 15th Round NSWRL VB NSW Cup match between Wests Tigers and Newtown, played at Leichhardt Oval on Saturday, 21st June 2014.

The Newtown Jets dropped out of the NSW Cup top eight following their 32-16 loss to 3rd placed Wests Tigers at Leichhardt Oval on Saturday. The Tigers led 16-4 at halftime but Newtown mounted a strong fightback in the second half to trail 20-16 with twenty minutes to play. A missed scoring opportunity in the 70th minute was Newtown’s last genuine chance to get within striking distance. Wests Tigers scored another converted try in the last minute of play to extend their winning margin to 16 points.

The Tigers opened the scoring in the 4th minute and their sharp ballwork and ability to move the ball quickly to the edges troubled the Jets on further occasions in this match. Newtown defended well for a period right on their own line and then scored an exceptional try, with Willis Meehan, Ryan Verlinden and Sio Siua Taukeiaho all involved before Samisoni Langi scored in the right-hand southern corner. The Jets missed another scoring chance several minutes later, then a penalty to Wests Tigers at Newtown’s end saw a Tigers forward crash over near the Newtown posts. Another penalty that granted valuable ground to the Tigers ended in another try to the home team in the 35th minute, which was converted from near the right-side touchline.

Coach Greg Matterson impressed upon the Newtown players at the halftime break that their impatience with the ball and failure to build and sustain pressure, plus the concession of vital penalties had all cost the Jets dearly. Matterson noted that the Jets had defended very well on their own line for extended periods, but this had been undermined by the penalties conceded at their own end.

The Tigers scored early in the second half, once again by engineering an overlap through their quick passing. Wests Tigers led at this stage by 20-4 but the Jets then displayed their own attacking prowess with a long-distance involving the elusive Samisoni Langi and the ever-reliable Heath L’Estrange, which was finished off by Kurt Kara. Rhyse Martin’s conversion narrowed the margin to 20-10. The Jets put themselves right back in the game when L’Estrange made a splendid midfield break which was completed by the fast-supporting Arana Taumata. Martin’s second conversion had Newtown trailing by 20-16 with twenty minutes left to play.

Wests Tigers gave themselves a handy points buffer with a well-crafted try up their left-hand side, and the conversion gave them a 26-16 lead. Newtown missed a scoring opportunity in the 70th minute that would have put them back to within four points of the Tigers. The game was effectively over when Wests Tigers added a converted try in the last minute of the game.

Jets hooker Heath L’Estrange once again showed his class and experience and no doubt the struggling Bradford Bulls would like to still have him on their books. Newtown’s big forwards Kane Evans, Willis Meehan and Ryan Verlinden all made good metres and gave the Tigers pack a tough afternoon. Backrower Dave Harris turned on a strong performance against his former club. Coach Matterson acknowledged that his players had run one of the leading teams in the competition very close and that they needed to learn from this experience for the critical games ahead.

The Jets must win on Saturday (28th June) against Wyong at Henson Park to stay in touch with the quest for the top eight. The Jets-Wyong match gets underway at 3.00pm and will be preceded by a NSW Cup curtain-raiser between the Cronulla Sharks and Canterbury-Bankstown which is timed for a 1.00pm start.