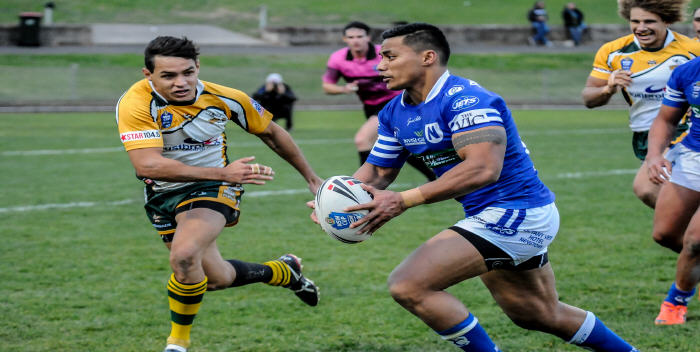 Report on the 16th Round NSWRL VB NSW Cup match between Newtown and the Wyong Roos, played at Henson Park on Saturday, 28th June 2014.

The two teams fighting for a place in the NSW Cup top eight turned on a high-scoring game at Henson Park last Saturday. Newtown scored eight tries to six in defeating the Wyong Roos 40-26, after leading by 16-12 at halftime. The Jets pulled away to a 36-18 lead with twenty minutes remaining, but didn’t really seal the result until much closer to full-time. A big crowd had turned out to enjoy the school holidays Family Fun Day and were granted pleasant weather in the first half, but many families fled the Henson Park hill area as the weather deteriorated and a bitterly cold southerly arrived midway through the second half.

Wyong ran with the wind in the first half but Newtown scored first when winger Brett Lane crossed on the end of a perfect opening set from the Jets. Newtown blew a scoring opportunity in the fifth minute when several Jets players were ruled to be in front of the kicker. The Roos scored a soft try a few minutes later when former Newtown player and Cook Islands international Jono Ford dummied his way through some less than committed Newtown defence.

The Jets put further pressure on themselves with a series of handling errors. In fact both teams put a lot of ball to ground and Newtown’s kicking on the fifth tackle had been ineffective. The Jets managed to score through fullback Jonathon Reuben even though the execution of play leading to this try was less than perfect. Undisciplined passes by the Jets gave the Roos possession in favourable attacking positions, with the Wyong boys scoring on both occasions but failing to convert either try. The Jets went in the break leading by 16-12 after newly-signed centre Junior Vaivai displayed good footwork and determination to score after Brett Lane had made a splendid midfield dash.

Newtown took advantage of a very strong wind in the second half and scored two quick tries to extend their lead to 26-12. Winger Matt Evans darted over in the left-side northern corner and prop Ryan Verlinden delighted the big crowd with another of his trademark bulldozing charges to score by the uprights. Wyong stayed in the game at 26-18 when the Jets failed to gather in an awkwardly bouncing grubber kick near their posts.

The Jets looked to have the game in their keeping when Brett Lane and Sio Siua Taukeiaho added tries to take Newtown’s lead out to 36-18. More Newtown errors gave the Roos plenty of ball in good field position and they stayed in the game with two more tries to trail 36-26. The impressive Vaivai set up a second try for Matt Evans five minutes before full-time, which guaranteed the two competition points for the Henson Park brigade.

Jets coach Greg Matterson was pleased to accept the two points but was less than impressed with the team’s overall performance. He said that Newtown’s first half had been rather ordinary with some poor kicking and too much lost ball, topped off by some baffling passing options. The Jets would have to improve when up against teams from further up the competition table. Junior Vaivai made a great debut, scoring one try and setting up two more. Brett Lane had one of his best games this season and towering front-rower Kane Evans was both aggressive and effective as he took on the Roos forwards.

The Jets are back at Henson Park this Saturday, 5th July, for what will be the second-last home game occasion at Henson Park this season. Only one competition point separates the two teams as the 9th placed Jets take on the 7th placed Cronulla Sharks, with the match getting underway at 3.00pm.