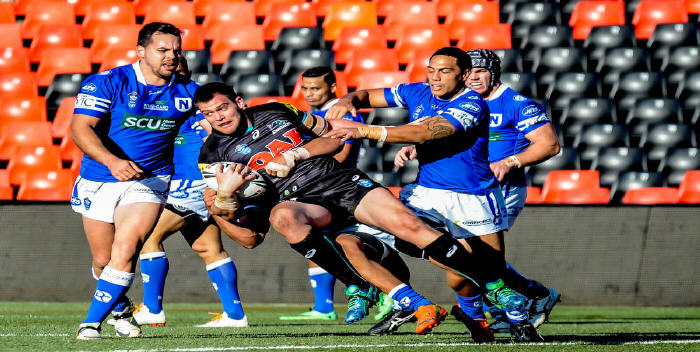 Report on the 18th Round NSWRL VB NSW Cup match between Newtown and the Penrith Panthers, played at Sportingbet Stadium on Saturday, 12th July 2014.

This match had all the hallmarks of what looked likely to be a blow-out victory to the Penrith Panthers. Coming on the end of a somewhat difficult week for the Newtown club, the Jets fielded a less than full strength team for this 18th round clash at Sportingbet Stadium. The Panthers were clear leaders in the NSW Cup competition and were aiming at their twelfth successive winning game.

Newtown made a promising start with centre Samisoni Langi cutting through to score, courtesy of a well-directed pass from Sio Siua Taukeiaho. Penrith then dominated the play for most of the first half, scoring four unanswered tries and looking to be capable of running away with the game. Penrith led 22-4 and were playing the brand of football that has stamped the Panthers as the premiership favourites in this grade.

The Jets finished the first half on an upbeat note, with winger Brett Lane scoring at the southern end thanks to a quirky “Falcon” provided by Samisoni Langi. Some of the Penrith players challenged the legitimacy of the try but referee Liam Nicholls saw some humour in the aerodynamics as to how the try was scored. Sio Siua Taukeiaho’s conversion from wide out made the half-time score 22-10 to the Panthers.

Samisoni Langi went close to scoring for Newtown early in the second half but the Panthers broke away from their own end and posted their fifth try, extending their lead to 26-10. The Jets fought back with great determination at this point and for the next twenty minutes gave coach Matterson plenty to be pleased about. Brett Lane scored his second try in the 60th minute, but Taukeiaho’s conversion attempt smacked into an upright and bounced away. The Jets contained Penrith in their own half and halfback Scott Dureau, on debut with Newtown after several fine seasons with the Catalan Dragons, shimmied his way through the Panthers defence and with a deft offload sent hooker Kurt Kara in between the posts. Taukeiaho’s conversion put Newtown to within a converted try of the Panthers with nine minutes left to play.

Unfortunately for the Jets that was to be as close as they would get to the Panthers. Newtown mounted an attack from within their own half but a pushed pass ended up in the hands of a particularly fleet-footed Penrith winger whose try virtually sealed the result. The Panthers added one more converted try before full-time to blow out their final winning margin to 36-20.

Jets coach Greg Matterson expressed approval with the effort displayed in what had been one of the season’s toughest assignments. A lack of composure cost the Jets dearly just when they had worked so hard to get back within striking distance of the Panthers. Penrith officials admitted after the game that Newtown had given them quite a scare when the Jets pulled backed to be within six points with less than ten minutes left to play. Matterson gave a tick to Scott Dureau’s performance in what was his first game since February. He also gave a high rating to the performance of the three front-rowers Andrew Pearn, Ryan Verlinden and Willis Meehan. Sio Siua Taukeiaho had a very strong game and Brett Lane ran the ball with purpose.

The Newtown Jets return to Allianz Stadium next Saturday, 19th July, for what will be their second live appearance on Fox Sports Television. Their opponents are none other than – the Penrith Panthers, with this NSW Cup encore performance timed for kick-off on Saturday at 12.40pm.