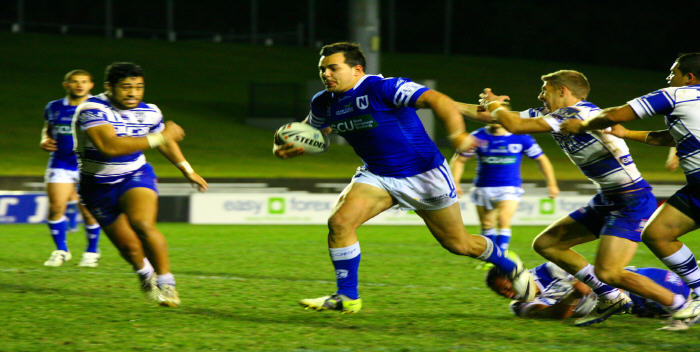 Barnstorming Newtown front rower and cult-hero Ryan ‘Rhino’ Verlinden on his way to scoring the first of two tries against the Bulldogs as partner-in-crime Ray Moujalli watches on. Both men proved a real handful for Canterbury in the Jets’ win.

Report on the 20th Round VB NSW Cup match between Canterbury-Bankstown and Newtown, played at the Belmore Sports Ground on Friday, 25th July 2014.

The Newtown Jets had the relatively rare experience of a floodlit NSW Cup match when they took on neighbouring club Canterbury-Bankstown at Belmore Sports Ground on Friday night. The Dogs were well down the competition table but they presented a real danger game for the Jets with their skill, speed and enterprise.

Newtown began the match well with back-rower Ray Moujalli crashing through the Bulldogs defence in the fifth minute to score near the posts. Winger Brett Lane caught the Dogs out when he won the race to a bouncing ball inside the Canterbury in-goal. The Bulldogs had a strong period of play midway through the first half when they put on two tries to draw level at 10-all. Brett Lane claimed his second try for the night when the Bulldogs failed to deal with a well-placed high kick from Jets halfback Scott Dureau. Canterbury continued to threaten at Newtown’s end and gave the Newtown outside backs some anxious moments. Scott Dureau unleashed a distance-gaining penalty punt kick and in the ensuing passage of play Jets prop Saulala Houma rampaged across the try-line. Newtown led 20-10 at halftime but in an interesting statistical twist the Bulldogs had compiled a far higher first half completions rate than the Jets.

Newtown extended their lead soon after halftime when hooker Heath L’Estrange scored near the posts at the railway line end. The Dogs returned fire with another converted try and showed they could effectively punish the Jets for any errors made at their own end. Front-rower Ryan Verlinden tore through several tackles to score as he finished off some well-executed lead-up work, and fullback Nathan Stapleton’s fourth conversion gave Newtown a 32-16 lead midway through the second half. The Dogs stayed in the game when they scored again after applying pressure for an extended period in Newtown’s territory and narrowed the gap to 32-22. It wasn’t until ten minutes from fulltime that Ryan “The Rhino” Verlinden scored his second bullocking try and made the result safe for Newtown.

Areas of concern mentioned by Jets coach Greg Matterson in his post-match observations included several missed one on one tackles by Newtown players that gave some oxygen to the Bulldogs’ attack. Newtown had other anxious periods in the game when Canterbury gained repeat sets or were awarded penalties in the Jets’ half.

Newtown’s heavy artillery brigade stood up and took control of the game when most needed. Kane Evans, Saulala Houma and Ryan Verlinden were the best of the forwards, along with the organisational work and precise dummy-half play from the experienced Heath L’Estrange. Hard-running Josh Davis had made an impact from the bench with some bruising tackles. Scott Dureau’s clever ball-work and strong kicking game were of great value to his team. Nathan Stapleton was very tidy at fullback and returned the ball capably in dangerous situations.

The Jets are at home at Henson Park for the last time this season on Saturday, 2nd August. Newtown’s last home game each year is the club’s Annual Reunion Day and it coincides with a vital game for the Jets against the third-placed Wests Tigers. This is another must-win game for the Jets in their quest for the finals, and this 21st Round NSW Cup match gets underway at 3.00pm.