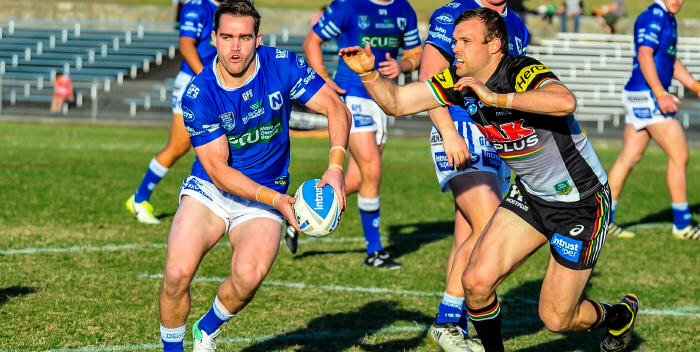 Jets hooker Adam Clydsdale (with the ball) was one of Newtown’s best forwards against the Penrith Panthers at Henson Park last Saturday. Photo: Gary Sutherland Photography.

Penrith put paid to Newtown’s slim semi-finals aspirations when the in-form Panthers defeated the Jets 46-10 at Henson Park last Saturday. This 23rd round Intrust Super Premiership match was always going to be a big ask for an under-strength Newtown team, up against the side with the best defensive record and the best points for and against aggregate in the competition.

The Jets scored the opening try when centre Edrick Lee crossed in the fifth minute and five-eighth Joseph Paulo converted from wide out. Newtown still led 6-0 twenty-five minutes into the first half but handling errors and penalties gave the Panthers the opportunities they needed. They put on four tries to lead 22-6 at the half-time break.

Newtown scored first in the second half and were still in the game trailing by 22-10, but the Panthers clicked into gear and added another four converted tries before full-time.

Newtown’s forwards all worked hard up against a much bigger Panthers pack, while young winger Tyla Tamou and Edrick Lee were rated as the best of the Jets backs. Lee won plenty of friends in the Henson Park crowd when he displayed exceptional speed and admirable determination to run down the Penrith five-eighth Liam Coleman who seemed certain to score a long-distance try.

The Jets come back to Henson Park this Saturday, 19th August, when they play the Canberra Raiders partnership club Mounties at 3.00pm.