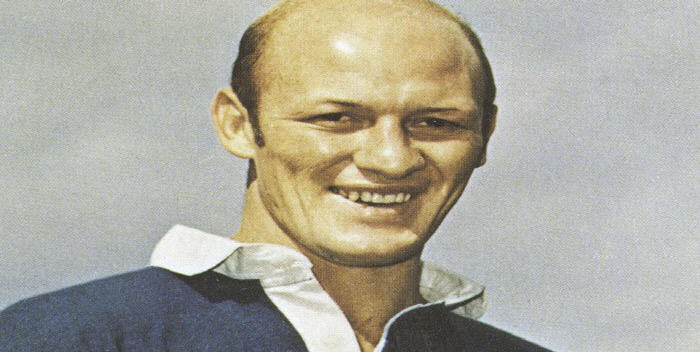 JETS MOURN THE LOSS OF MOORE

THE Newtown Jets have lost one of the most iconic figures of their 108-year history following the passing of former player, coach and Team of the Century member, Brian ‘Chicka’ Moore.

Mr Moore passed away from a long illness yesterday aged 70. Newtown Jets director and media manager Glen Dwyer says Moore will forever be remembered by the Henson Park faithful for his significant contribution to the foundation club.

“For the baby-boomer generation, Chicka Moore was the living definition of Newtown,” Dwyer tells RLW.

“He never had the privilege of being in a premiership winning first-grade  side or playing in a Test match, yet no one who saw him in his prime would deny that he was one of the best centres of the period.

“He was a tall, long striding, majestic running centre. In the days where men were starting to grow their hair longer Chicka with his bald head was a landmark at Henson Park.

“His combination with fellow centre Bob Keyes was marvellous and I’ve heard lots of judges say that if Reg Gasnier and Graeme Langlands weren’t around, Brian Moore and Bob Keyes would have been the Australian Test centres without doubt.”

Moore played for Newtown during a difficult period, with the Bluebags only making the finals three times during his 11-year career. However, there were a couple of highlights to savour.

Arguably the finest moment of his career came in 1973 when he almost single-handedly helped Newtown to a remarkable comeback win over St George in the final of the 1973 Wills Pre-Season Cup.

“Newtown were down 15-2 at halftime and the heat was horrendous,” says respected rugby league historian Terry Williams.

“They won 17-15 and that was largely on the back of Chicka. He basically took St George on on his own. In  attack he cut the Dragons to pieces out wide and when they had the ball he became a road block.

“In that form he could match any centre in the world.”

Moore represented NSW on three occasions between 1963 and 1970 and was Australia’s top tryscorer during the 1967-68 Kangaroo tour, despite not playing in any Tests.

Unfortunately, he had the misfortune of coming through in the same era as RLW Immortals Bob Fulton, Reg Gasnier and Graeme Langlands and probably didn’t represent Australia as much as he should have.

A Newtown man through and through, Moore also held the distinction of being the Jets’ last-ever first grade coach taking the reins for the 1983 season following Warren Ryan’s resignation.

A respected police officer, in 2008, Moore was inducted into the NSW police Team of the Century while in 2009 he was awarded the NSW Police Medal for diligent and ethical service during his 29-year career in uniform.

“For all his footballing achievements he probably affected more people’s lives in his role as a physical instruction trainer at the police academy,” Williams says.

“There’s a whole generation of young coppers for one or two decades who were put through their paces by Chicka.

“He used to wipe the floor with all these young blokes who were 20 years younger than him.”

“He was just a really memorable character,” Dwyer continues.

“He was a marvellous personality and a great ambassador for the Newtown club.”

Brian’s funeral will be held on Friday 31st October from 10.30am at Eastern Suburbs Crematorium, with a wake to follow at The Henson (formerly Henson Park Hotel, Illawarra Road Marrickville) thereafter.