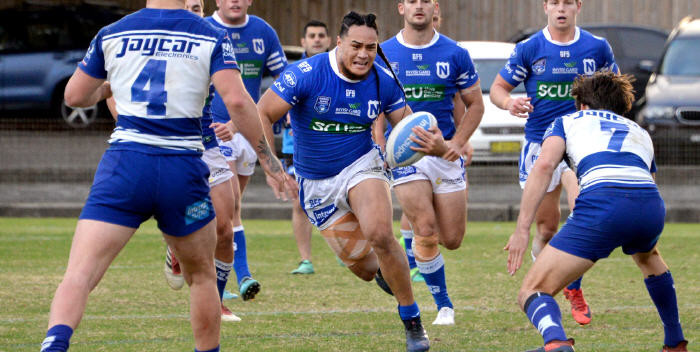 The Newtown Jets defeated fourth-placed Canterbury-Bankstown 20-6 at a cold and overcast Henson Park on Saturday afternoon. While this was Newtown’s first win at home this season, the Jets have shown they are capable of beating any team in this year’s Intrust Super Premiership rugby league competition.

The Jets ran into a strong southerly in the first half but they took their chances to score three tries and went into the halftime break with a 14-6 lead. The Bulldogs scored one try from a kick in the first half and had been frustrated by Newtown’s determined defence.

The second half was a tense contest and Newtown’s on-line defence was repeatedly tested by Canterbury’s giant forward pack. The Bulldogs had a try disallowed early in the second half and Newtown missed a couple of scoring opportunities to extend their lead. The Jets wrapped up the game six minutes out from fulltime when halfback Kyle Flanagan made a smart break past tiring defenders and sent lock forward Jack Williams over near the northern end goal posts.

Frontrower Braden Uele and lock Jack Williams were the best of a Newtown forward pack that worked extremely hard in defence in both halves. Winger Charlton Schaafhausen and fullback Will Kennedy were the best of the backs. Uele, backrower Briton Nikora, Schaafhausen and lock Williams scored Newtown’s tries and Flanagan kicked two goals. The bulk of the tackling workload in the forwards was shared between Kurt Dillon, Blayke Brailey, Billy Magoulias, Briton Nikora, team captain Scott Sorensen and Jack Williams.

Even though Canterbury spent more time overall in Newtown’s territory, the Jets had 52% of possession for the game. The Bulldogs had a completion rate of 83% and Newtown was close behind with 82%. Penalties favoured the Jets 11-9. Canterbury’s Josh Bergamin was sin-binned in the 71st minute. Newtown centre Addison Demetriou ran with the ball for an impressive 243 metres during the course of the game.

The Jets have a bye next weekend and will be back at Henson Park on Saturday, 16th June, to play the competition leaders Mounties in a televised match starting at 1.00pm.

The match was broadcast live by Steele Sports.

Please spread the word throughout all your Jets network that Newtown’s next home game is on Saturday, 16th June and is a televised match kicking off at 1.00pm.

The full details of Newtown’s next game are:

This match is going to be televised live on Channel Nine.