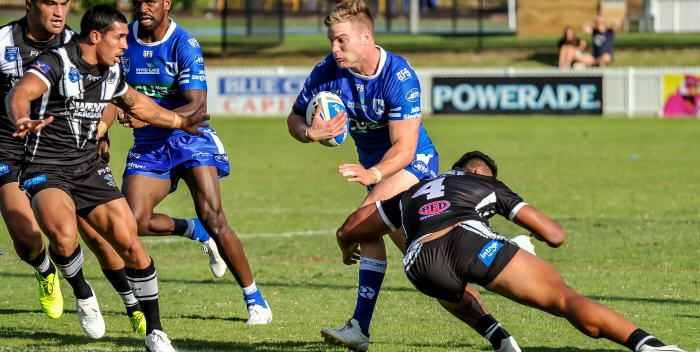 The Newtown Jets might be negotiating a rocky pathway in the Intrust Super Premiership NSW competition at the present time, but the club has had six players chosen in the various rugby league rep teams named for next weekend’s matches.

The Jets lost to Wentworthville 20-12 in the 9th round ISP NSW match played at Ringrose Park on Sunday afternoon. Wentworthville led 14-0 at halftime and although Newtown fought back in the second half, they were unable to overhaul the home team’s lead.

Other Round 9 ISP NSW results:

Newtown kick off to the northern end of Ringrose Park.

7th min: Break up the middle, Jamal Fogarty scores under the posts and converts his own try.

15th min: Newtown’s end of set kick out on the full, Wenty gain possession on halfway.

Wenty had a lot of ball in first 20 mins, Newtown’s defence tested

Newtown pulled up for accidental shepherd in 24th min; scrum feed to Wenty 25m out from Newtown’s line

Another penalty to Wenty in 28th min

Jets lose the ball midfield in 38th min, just when they desperately need some time with the ball.

Great start, as Jets score in the first min

Break made by Manaia Cherrington, off-loads to Matt Evans backing up, and then to Sam Tagataese who races away to score under the posts

Wenty kick-off goes out on the full

Has the wheel turned?

No. In 45th min Wenty (Bureta Faraimo) scores 10 m to the left of northern goal posts)

Wenty defence is up to the task

59th min: Fa’amanu’s grubber kick into Wenty’s in-goal in nth-eastern corner looks as if it has been grounded by Jordan Drew, but referee Briscoe rules no try

61st min: Midfield pen to Wenty puts them back in possession deep in Newtown’s territory

77th min: Jets throwing the ball around but caught on last tackle 30 m out from Wenty’s try-line

Another good attacking movement by Newtown in the 79th min but the ball ends up in Wenty’s possession.

Penalties for the game: Newtown 11-6.

And from Mario Facchini:  http://mafphotography.blogspot.com.au/2017/05/intrust-super-premiership-2017-round-9.html

We don’t often carry advertising for other clubs’ promotional activities, but this is a very special cause and one that we heartily endorse. We do however take issue with our old inner-western rivals as to who was the first Rugby League club to be formed in Australia!

The Glebe Rugby League Football Club, the infamous Dirty Reds who existed from 1908 to 1929, have been reformed and they are holding a revival lunch this coming Saturday, 6th May, at 99onYork in the city. Here are the details:

Be part of history as the Glebe Dirty Reds officially re-launch after an 87 year absence from the NSWRL. Come and join us for lunch on Saturday, May 6th as we officially re-launch Australian rugby league’s first-ever club at 99onYork in the city. We will induct three players into the newly created Glebe Dirty Reds Hall of Fame, play the Denis Carnahan performed team song publicly for the first time, and we’ll hear two-time premiership-winning coach Phil Gould speak about the importance of tradition and community in rugby league. All that plus a two-course lunch and drinks for just $80! Get your tickets now through: https://www.stickytickets.com.au/search?keywords=Glebe+Dirty+Reds