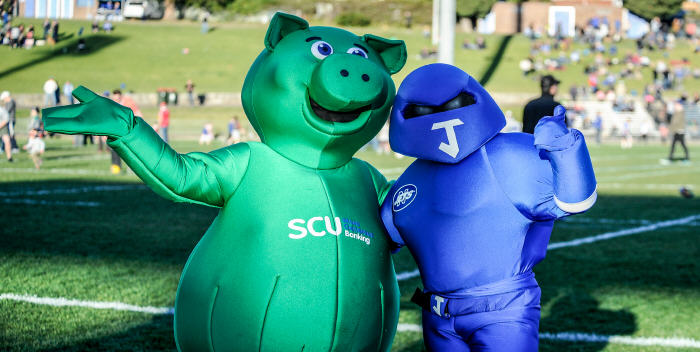 Syd the Pig and Jetman at Henson Park in 2014

The Newtown RLFC is pleased to announce that SCU – More Generous Banking will be the club’s front of jersey sponsor again in 2015.

SCU has been Newtown’s major sponsor since 2012 and the innovative financial sector organisation’s logo was very much to the fore when the Jets claimed the 2012 VB NSW Cup premiership title.

The Newtown RLFC also acknowledges the splendid negotiation skills and Rugby League nous of the long-serving Director and financial benefactor Terry Rowney and the club’s General Manager Stuart McCarthy, who both represented the club in the lengthy discussions and business presentation that resulted in the sponsorship being extended. We thank them for their professionalism.

The SCU executives and staff are regular attendees at Henson Park home games and are always welcome guests at Newtown RLFC functions.

SCU’s distinctive mascot Syd the Pig has been a popular visitor to Henson Park for major games, and he has attracted an army of young supporters from amongst the hundreds of children who attend the Jets home games.

Syd the Pig has also made a strategic alliance with the Newtown Jets very own Jetman (pictured), and 2015 may well the year that the dynamic duo help to conjure up another premiership for the boys in Royal Blue.

You can check out all you need to know about SCU – More Generous Banking on their website: http://www.scu.net.au/