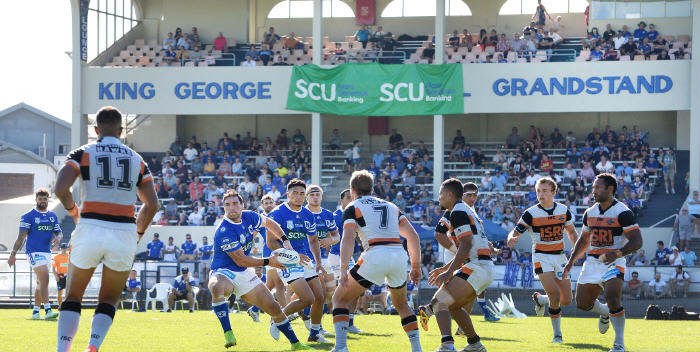 The 2016 Jets start to show what they are capable of

The Newtown Jets turned on one of their best home-game performances in recent seasons, when they defeated the third-placed Wests Tigers 38-14 at Henson Park last Saturday. Played in front of a healthy early-season attendance, the Jets led 22-10 at half-time and unlike other games this year didn’t allow the opposition back into the contest in the second half. After five rounds Newtown is now in third place on the Intrust Super Premiership NSW competition table.

The Jets made a slow start in this match with some poor handling and being outmuscled in the midfield. Wests Tigers scored a soft try from dummy-half and led 6-0 after seven minutes. Once Newtown obtained a share of possession they made inroads into the Tigers defence, and hooker Matt McIlwrick sliced through to score in the 12th minute. Some poor one on one defence allowed Wests Tigers to score wide out in the north-eastern corner to take the lead 10-4.

Newtown began to exert some authority midway through the first half and clever halfback Fa’amanu Brown dummied his way across in the 22nd minute. The Jets put some continued pressure on the Tigers and were rewarded in the 30th minute, when crisp ball-handling up the left side sent centre Jordan Drew over in the south-eastern corner. Fa’amanu Brown converted from out wide for Newtown to take the lead by 14-10. The Jets scored again when a well-constructed passing movement saw winger Jacob Gagan cross in the south-western corner, with half-back Brown again adding the extras. Brown kicked a penalty goal right on half-time for Newtown to lead 22-10 at the break.

At half-time coach Greg Matterson laid down the challenge to his players not to let the opposition back into the game in the second half, as had happened in the previous three games. Matterson said that an improved kicking game by the Jets would be a key component to shutting out any Wests Tigers resurgence.

The Jets laid on their best try of the game when winger Travis Robinson combined well with Jordan Drew, who in turn off-loaded to team captain Mitch Brown. This spectacular phase of high-speed play ended in Brown toeing the ball ahead and grounding it next to the northern end posts, amid great jubilation from the big Hipsters Day crowd.

Newtown’s controlled and effective play brought further dividends when Matt McIlwrick kicked ahead into the Wests Tigers in-goal and giant prop Andrew Fifita won the race to the ball. Ten minutes later Jacob Gagan scored his second try on the end of a superb cut-out pass from five-eighth Josh Cleeland. Wests Tigers scored their only try for the second half with a long-distance runaway effort five minutes before full-time.

The Jets’ big men played a major role in this victory with their midfield control and combined workrate. Front-rowers Jesse Sene-Lefao and David Fifita and hooker Matt McIlwrick were all prominent, and ball-playing backrower Kurt Capewell is starting to gel with his new team-mates. Jason Schirnack was again very effective as an impact player from the bench. Five-eighth Josh Cleeland was in fine touch with his passing and kicking game, and Fa’amanu Brown, Mitch Brown and Josh Gagan were the best of a strong Newtown backline.

The Newtown Jets play away to Canterbury-Bankstown in the sixth round of the Intrust Super Premiership at Belmore Sports Ground this Friday night, 8th April, at 7.30pm.