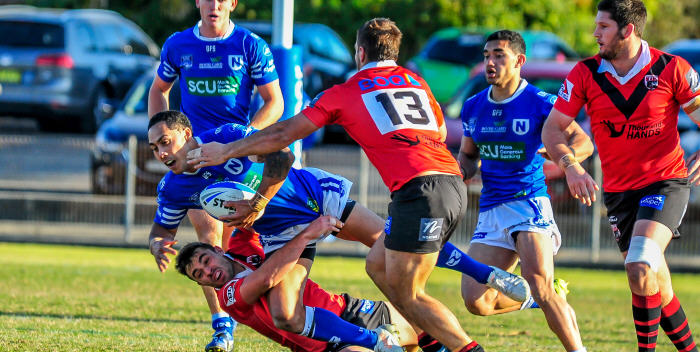 The Jets 150-plus games player Kurt Kara is brought to ground by North Sydney defenders on Saturday, with team-mates Jordan Galloway and Tyla Tamou close by. Photo: Gary Sutherland Photography

The Bears take the competition points, but the Frank Hyde Shield is shared for 2017

The Newtown Jets ended their 2017 ISP NSW season with a 16-12 loss to old foundation club rivals North Sydney. The Bears led 16-12 at halftime, with neither side scoring any further points in the second half. As Newtown had beaten Norths 16-12 at North Sydney Oval on 14th May, both clubs had won one game each this year and most unusually had identical points for and against. On that basis the Frank Hyde Shield was a drawn series for 2017, with Newtown remaining the custodians having won the Shield in 2016.

Norths kicked off, running to the northern end.

2nd minute: Norths break clear up their left side, Tautalatasi Tasi makes a long break and gets the ball back inside to Ed Murphy who scored to the left of the goalposts.

9th min: Jason Schirnack puts on a massive hit and then is surprisingly penalised for not getting off the tackled player quickly enough.

Another penalty to Norths 10 metres out from Newtown’s tryline.

Norths opt for a tap penalty.

And now another penalty to Norths.

By this stage a big section of the reunion day crowd is baying for the referee’s blood!

With such a wealth of possession Norths work an overlap on their left side and Tasi scores in the NW corner in the 13th minute.

Bears make a handling error at their own end in the 15th minute, and now the Jets get a crack at Norths tryline.

Newtown receive a penalty in front of the Norths posts and they take a tap.

17th minute: Good dummy-half service from Adam Clydsdale and Jack Williams charges over to the right of the southern goal-posts.

Joseph Paulo converts the try and its Norths 10-6 after 18 minutes.

20th minute: Fa’amanu Brown gets through the Norths right-side defence and sends Edrick Lee away on a good run, but Lee’s inside-pass goes to ground.

Newtown looking more determined and purposeful in their mid-field carries.

Schirnack is back on in the 22nd minute.

Norths adopt the tactic of kicking for the sideline on their final tackles.

Paulo looks impressive as he moves forward with the ball in hand in the 28th minute.

Tyla Tamou nearly caught inside his own in-goal but he just makes it back into the field of play, avoiding the goal-line drop-out situation.

Norths create another overlap, this time through their right side attack and Miski scores in the NE corner

A disappointing outcome, as the Jets have had the better of play in the previous 15 minutes

Levido converts from the sideline and Norths lead 16-6 after 35 minutes.

Bears create an overlap on their left side but fortunately for Newtown they lose the ball.

Newtown get a full set at Norths end.

The ball is shifted quickly to the right and Brent Anderson scores in the SW corner in the 39th minute.

Converted from wide out by Paulo.

All to play for in the second half.

Norths are finals-bound but are keen on wresting back possession of the Frank Hyde Shield.

Several members of the Hyde family are present at the match.

Ground announcer John Lynch remarks that this game could break wide open to either team, or it could end in a draw.

Norths continue to kick over the sideline on the 5th .

Jets aren’t making much ground working the ball out from their own line.

A good kick by Paulo, chased well by Jets defenders trapping Norths in their in-goal

Bears take a goal-line drop-out in the 50th minute

Penalty to Newtown for a head high tackle by Norths player

The game is in the balance, with both teams carrying the ball to either end

Despite the occasional errors, the crowd is getting their money’s worth in terms of a tense contest

Norths lose the ball at Newtown’s end in 59th minute

Newtown gets extremely close to scoring in the 60th minute, with Anderson stopped right in the NW corner

63rd min: Clydsdale is across the line but is held up by Norths defenders

68th min: Kurt Dillon is maintaining his reputation as one of the hardest working front-rowers in the ISP NSW

(Dillon is rewarded on Monday, 28th August with selection in the ISP NSW team of the Year!)

In the 69th minute, Norths knock on a high kick and then there is a penalty to Newtown

There is a good standard grubber kick into Norths in-goal in the 70th minute, but it just curves around and goes across the touch-in-goal line without having to be handled by a Norths defender. Brent Anderson goes very close to grounding the ball.

Norths get their chance but their in-goal grubber kick goes dead in the 72nd minute, and the Jets get a 7-tackle set

An attempted intercept by Norths nearly comes off, but Newtown gets a penalty 10 metres out from Norths line

75th minute: Kurt Kara goes desperately close to scoring to the left of the goal-posts.

(He announces his retirement from rugby league after the game. It would have been a marvellous send-off to this tremendous Jets stalwart had he scored the winning try).

The Jets win a scrum against the feed (by pushing) but the referee sets the scrum again! (SMH journalist Peter FitzSimons would go ballistic if he saw this.)

Norths make quite a bit of ground in the next set.

Norths kick the ball over the sideline in the 76th minute running the clock down.

77th minute: Jets can’t handle the ball just after the Bears had turned over possession

Norths turn the ball over midfield in the 78th minute.

Full-Time: Norths maintain their 16-12 lead and the Frank Hyde Shield series for 2017 is drawn.