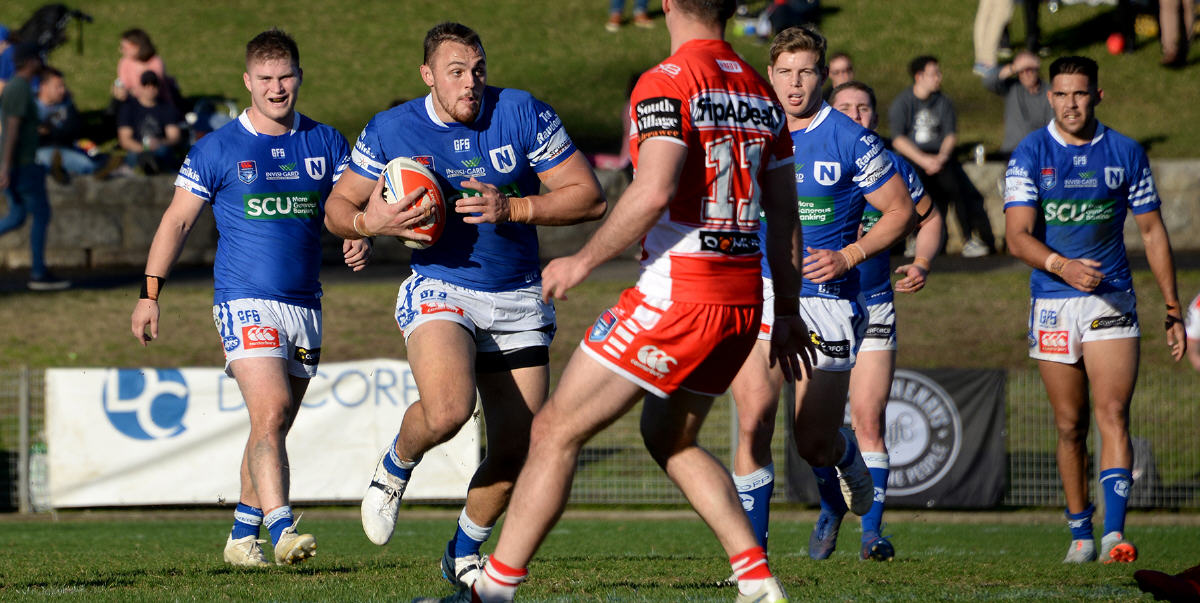 Hard-working front-rower Jimmy Jolliffe (with the ball) has been one of the Jets’ most consistent forwards in the 2019 season. He was rewarded recently with a full-time contract from the Cronulla-Sutherland Sharks. Photo: Michael Magee Photography.

The Newtown and North Sydney clubs meet at North Sydney Oval this Sunday, 14th July, for the deciding match in the 2019 Frank Hyde Shield series. This game is also vital for the Jets’ finals aspirations as a loss could see them drop out of the top eight. Newtown regained their winning form against St George-Illawarra last Saturday while North Sydney won impressively against Western Suburbs.

Well done to Ethan Lowe – ten years ago he was a lanky second-rower in Newtown’s well-performed SG Ball Cup team of 2009. A decade later and he has made a very impressive debut for Queensland in State of Origin III.

Big Saulala Houma was a popular playing identity at Henson Park between 2012 and 2017. Last Sunday he scored three tries for Wagga Kangaroos in their shock win over the Group 9 competition leaders Gundagai.

The North Sydney Bears have issued an invitation to Newtown Jets supporters to their truly splendid post-game venue, The Greens at 50 Ridge Street, North Sydney. The gates at North Sydney Oval open at 10.45am and there is a NSWRL Tertiary Rugby League representative trial match prior to the North Sydney v Newtown showdown. There will be a face painter and jumping castle at Bear Park on Sunday.

The fourth annual Beer, Footy and Food Festival is on at Henson Park on Saturday, 27th July with the gates opening at 12 noon.

Check out this link for all your Festival knowledge and hard to answer questions:  https://www.newtownjets.com/beer-footy-food-festival/