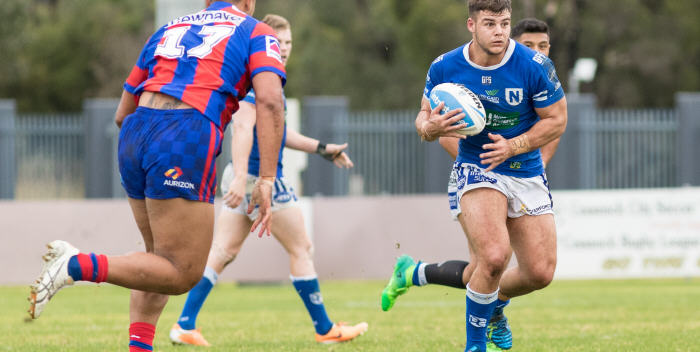 Weather: Grey and overcast. Heavy rain had fallen during the morning.

Congratulations to the young Newtown RLFC staff member Corey Griffiths-Simpson who has been chosen to be a ball-boy for State of Origin II at ANZ Stadium on Wednesday, 21st June 2017.

Newcastle kicked off to the southern end of the Cessnock Sports Ground.

The Knights came out of the blocks fast and dominated the first five minutes.

6th minute: Sam Mataora scores to the right of the goal-posts.

10th min; Midfield penalty to Newtown gives the Jets a chance to get at the Knights end.

11th min; Determined try by Daniel Mortimer, scored to the right of the northern end goal-posts

Converted by Fa’amanu Brown. 6-all after 12 mins.

13th min; James Tuitahi goes close on the right-hand northern corner but is tackled out.

21st min: Relieving penalty to Jets to get them away from their own line.

Converted from wide out by Fa’amanu Brown. Newtown 12-6.

35th minute: Jets moving the ball well and with purpose.

Daniel Mortimer’s cut-out pass ends in a try to Edrick Lee who takes the ball closer in to the posts.

38th minute: Knights looking dangerous at Newtown’s end but they lose the ball 5 metres out from Jets tryline.

Newtown had 56% of possession.

Coach Matterson says that defence is the key to the second half and he calls for a huge defensive effort from his players, knowing there will be a resurgence from the Knights.

Both teams desperately need to take the competition points from this game.

Jets kick off to the southern end.

Knights knock on a high kick in the 47th minute.

Penalty to Newtown in 48th minute helps keep the pressure on the Knights.

Kenny Niko takes a resounding hit to the side of his head and leaves the field for medical observation.

Knights get close to scoring in the 55th minute.

Repeat sets to the Knights at Newtown’s end in the 60th minute and now it’s the Jets under the cosh.

63rd minute: Trent Hodkinson charges down a Jets clearing kick, toes the ball ahead, regathers and scores to the left of the northern end uprights.

Knights stack their left side and good ball-handling and a determined effort by winger Tom Hughes sees him score in the north-west corner in 66th minute.

Not converted. Newtown leads 18-16 with 13 minutes left to play.

71st minute: Knights tackled out over the sideline 10 metres out from Newtown’s tryline.

Jets turn over the ball midfield in the 77th minute.

Penalty to Newtown 20 metres out from their own line in the 79th minute settles the issue.

Coach Matterson says this was a good, hard win and one we needed badly.

Knights had 52% of possession.

Penalties for the match: Newtown 7-5.