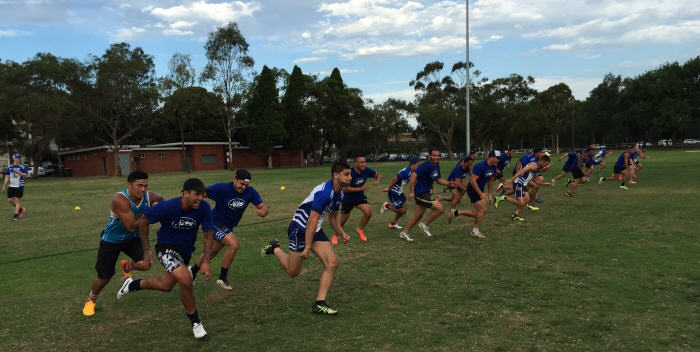 Is this the 2016 Stawell Gift field away to a flying start? It’s actually the Newtown Jets pre-season training squad hard at work at Mahoney Reserve, South Marrickville on the 1st December, 2015. Strength and conditioning coach Graham Morris (at the rear of the photo) monitors the proceedings. Photo: Wayne Leong.

The Newtown RLFC and the NSW Rugby League have voiced their concerns about the second-tier restructure proposal put forward recently by the NRL’s Head of Strategy Shane Richardson. The NSW Rugby League issued this statement on Tuesday morning, 1st December.

The management of the NSWRL and the CRL, as well as clubs, have expressed concern at plans presented to the ARL Commission that would influence the structure of second-tier Rugby League. A special sub-committee appointed by the NSWRL Board and Clubs to provide input into pathways proposals met yesterday. The committee expressed concern at many aspects of a proposal that NRL Head of Strategy Shane Richardson presented to the ARL Commission in October and which they believe has subsequently been approved in principle. These concerns are shared by the NSWRL Board, Clubs and the CRL, with the NSWRL and the CRL requesting an urgent meeting with Richardson prior to any further progress reports being provided to the Commission. Sub-committee Chairman Bob Millward has invited Shane Richardson to the group’s next meeting in mid-December. Terry Rowney and Stuart McCarthy are Newtown’s representatives on this NSWRL Sub-Committee, and they will be presenting the Newtown RLFC point of view with the utmost focus and conviction.

Newtown Jets head coach Greg Matterson reports that the young Jets squad has trained impressively over the past two weeks. It is a young, enthusiastic squad and the coaching staff are certain of unearthing some new talents. The boys are working extremely hard four days a week in various locations – in the gymnasium at 4 Rich Street, Marrickville; on the training track and oval at Mahoney Reserve in South Marrickville; and at different beachside and bayside locations on Saturday mornings. Greg said the squad put in a most searching workout last Saturday morning at Clovelly.

Get to know who’s in the Jets 2016 pre-season training squad:

Corin Smith – Played with Newtown in 2015. Has obviously been working on strength development since the end of August which will be of great assistance to his game.

Tarek Elmasri – Played with Newtown in 2015. Played for Lebanon in the recent World Cup qualifiers in South Africa.

Malakai Houma – Played with Newtown in 2015. Has obviously done plenty of weights work since the end of the 2015 season and is continuing to work hard.

Jackson Briskey-Luscombe – Ex-Gold Coast Titans NYC squad. He is a product of the Pittsworth Danes in the Toowoomba Rugby League club competition.

Ahmad Ellaz – Played with Newtown in 2015. Played for Lebanon in the recent World Cup qualifiers in South Africa. Ahmad is very well known to Jets fans.

Daniel Abou-Sleiman – Played with Newtown in 2015. Played for Lebanon in the recent World Cup qualifiers in South Africa. Daniel was in top form at the end of the 2015 NSW Cup season.

Kurt Kara – long-serving Newtown hooker, lock and five-eighth. Represented New Zealand Maoris in 2014 and is a product of the NZ Warriors development system.

Arana Taumata – he was most recently with Tumut in Group 9 and South Newcastle. He is determined to make 2016 his best year.

Harrison Muller – an impressive looking customer. Ex-Scots College Rugby 1st XV; has been chosen in the Emerging Blues squad; ex-Cronulla Sharks 2015 NYC. Looks like a younger version of David Klemmer. The training staff say he has a great physical frame to build on.

Kurt Dillon – played with Newtown in 2015. Has reported for 2016 training very fit and focused.

Matthew Evans – played in the centres and on the wing with Newtown in 2014. Missed most of 2015 with injury.

The Newtown club wishes good luck to veteran front-rower Ray Moujalli who has accepted an offer from the Canterbury-Bankstown Bulldogs. Ray has made a great contribution to the Jets in different stints with the club.

Mahoney Reserve in South Marrickville has strong links to the Newtown RLFC from earlier decades. The senior grades used the ground as their pre-season training base in the 1940’s and 1950’s, and Newtown’s junior representative teams trained there in the 1960’s and 1970’s.

Wayne Leong is well-known as an extremely keen Newtown Jets and Sydney Roosters supporter. Wayne has kindly supplied these photos taken at the Newtown Jets training sessions in the past week: – Thursday, 27th November: https://www.flickr.com/gp/77485209@N05/UMs2Uu and Tuesday, 1st December: https://www.flickr.com/gp/77485209@N05/0xW99h

The latest Rugby League Player magazine (Season 7, Issue 25) is now available in newsagencies. There is an article on the Newtown Jets (plus photos) on page 8 of this issue.

Newtown’s great range of Jets clothing and merchandise also provides you with plenty of Xmas gift options. Go to: www.newtownjetsclothing.com.au where you can make your selections and purchase the gifts online. Get in now – Xmas is only three weeks away today!

Father Dave Smith, Parish Priest at the Holy Trinity Church, Dulwich Hill (corner of Herbert and Seaview Streets, Dulwich Hill) is a great Newtown Jets supporter and a tremendous worker for our community. The Holy Trinity Church celebrates its 100 years this Sunday, 6th December, and it is also Father Dave’s 25th year in the parish. A Newtown Jets banner is to be carried in the Centenary Procession which starts at 9.00am. The new Parish Youth and Community Centre is also to be opened this Sunday morning. All Newtown Jets supporters are welcome to view the procession and to help celebrate this joyous occasion in inner-western Sydney community life.