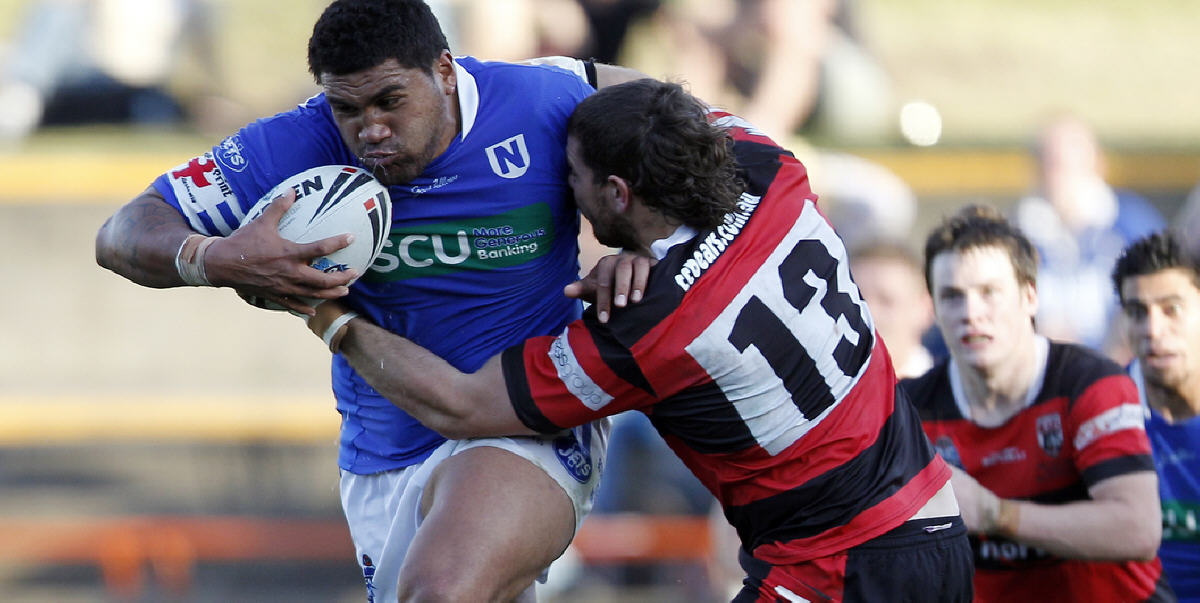 Mose Masoe was enormous for the Jets. He is pictured here after charging down Luke Keary's field goal attempt before offloading to Josh Ailomai. The next play Daniel Mortimer scored underneath the posts and converted to level the scores at 30-all and take the game into extra time. The rest is history! Photo: Mike Biboudis

The Newtown Jets have advanced into a Preliminary Final showdown with minor premiers Canterbury-Bankstown, after winning a thrilling elimination semi-final last Sunday against North Sydney by 32-30.

The Jets trailed the Bears by 24-6 well into the second half, and this astonishing come-from-behind victory would surely be the equal of any past encounters between these two Rugby League foundation clubs.

Newtown won this match with a penalty goal in golden point extra time, after the teams had been locked up at 30-all at the full-time siren.

The Jets have now won their past three games by a combined total of 9 points, and they have drawn big crowds of partisan followers to all three venues.

Newtown turned on a fairly ordinary first half performance, turning over a lot of ball and recording a poor completion rate. Norths had almost twice the Jets’ share of possession in the first half and led 18-6 at the break.

Newtown’s only first half try came in the 16th minute when winger Justin Carney leapt high and caught a well-directed kick from team captain and halfback Daniel Mortimer. Jets forwards Kurt Kara and Ahmad Ellaz worked doubly-hard in defence in the first half, in a critical period of the game where the Bears had a lot of ball and were dominating the rucks and looked to be more methodical in their play.

Jets coach Greg Matterson exhorted his players at halftime to hang tough and to put more pressure on the Bears. He was confident that the momentum of the game would shift and the game could be turned around.

He called for more energy and enthusiasm from his players and predicted that they could wrest control of the game away from Norths.

The first fifteen minutes of the second half looked anything but promising for the Jets, with critical mistakes still being made and the Bears scoring another converted try in the 12th minute to extend their lead to 24-6.

The pendulum of the game began to swing when towering Jets prop Mose Masoe crashed over next to the posts in the 18th minute, with Mortimer’s conversion narrowing the margin to 24-12. In what was probably a game-changing moment, winger Justin Carney snapped up a Norths grubber kick five metres from his own line and surged away for an exhilarating long-distance try, beating several Bears cover defenders in the process.

Moments later a poorly-judged chip kick gave Norths valuable position and possession, which the Bears quickly turned into another converted try and a 30-18 lead ten minutes from fulltime.

The Jets deployed a successful short kick-off from which leading try-scorer Daniel Tupou made valuable ground towards Norths’ tryline. Mose Masoe ripped through the Bears’ defensive line to score his second try, and Mortimer’s fourth conversion reduced Norths’ lead to 30-24.

With two minutes left to play, the Bears advanced downfield courtesy of a midfield penalty and went for a match-clinching field goal.

In an incredible display of determination and aerobic fitness, big Mose Masoe charged the drop-goal attempt down, regathered the ball at speed and made ground before unloading to fellow front-rower Josh Ailaomai, who in turn found well-performed centre Francis Vaiotu in close support.

Vaiotu delivered a good ball to Mortimer, who swerved and evaded several despairing Norths defenders as he raced in near the posts. Mortimer’s conversion tied the scores up at 30-all.

The Jets have had a somewhat unhappy record with golden point extra time in finals in recent years, but Sunday proved to be a different experience.

A 3rd minute play-the-ball infringement by the Bears saw Daniel Mortimer lining up a penalty-goal attempt from 35 metres out and 10 metres in from the sideline. As his kick went straight between the uprights, hundreds of Newtown supporters erupted into a frenzy of celebrations.

And they are talking about it in Orange!

Newtown’s coaching staff nominated Mose Masoe, second-rower Jack Bosden and Daniel Mortimer as being among the Jets’ best, and noted the outstanding first half defensive efforts by Kurt Kara and Ahmad Ellaz. Centre Francis Vaiotu was strong also, particularly when the Jets were under the cosh in the first half.

As coach Matterson observed, “this wasn’t a good performance overall, but we managed to hang in there despite our errors. The two miraculous long-distance tries helped save our cause and despite our poor execution, it was an outstanding effort to come from behind so late in the game.”

Newtown now moves into the Preliminary Final phase against Canterbury-Bankstown next Sunday, 23 September, with this match at Leichhardt Oval getting underway at 3.00pm.

The curtain-raiser Preliminary Final is between Balmain and the Newcastle Knights and is due to commence at 1.00pm.