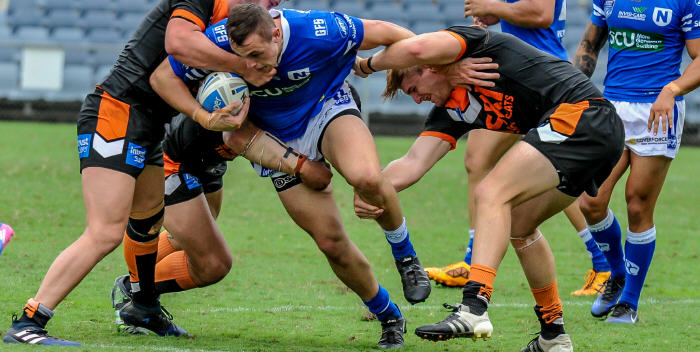 There’s plenty of improvement needed in this year’s Jets ISP NSW team, but no-one is arguing about accepting the points for Saturday’s win against Wests Tigers.

The Jets left it late to secure this win. Wests Tigers led 24-20 with six minutes left to play when the Jets put on what was probably the best try of the game to draw level at 24-all. Fa’amanu (Nu) Brown converted from the sideline to give Newtown a two-point lead.

Wests Tigers kicked off, running to the northern end.

5th min: Fa’amanu Brown kicks to the left-hand side, gathered in at top speed by <Matt Evans who scored in the south-east corner.

12th min: Wests tigers had extended possession at Newtown’s end. A kick into the in-goal is secured by Marshall-King who scored 10 m to the left of the northern goal-posts.

21st min: Tony Williams powers his way over to the left of the southern goal-posts.

26th min: Great catch by James Tuitahi under pressure right on his own tryline.

Converted from the sideline by Jordan Rankin.

Jets sideline crew not all that sure that Littlejohn grounded the ball before being tackled out.

38th min: Wests Tigers full of enthusiasm thanks to repeat sets and penalties at Newtown’s end.

Jack Williams is off the field with injury, doesn’t resume in the second half.

Wests Tigers led 7-4 in penalties. They had 71 plays with the ball compared to Newtown’s 58. Newtown missed 16 tackles in the first half.

Brown’s conversion attempt from the sideline hits the left hand upright and bounces away.

54th min: Wests Tigers over Newtown tryline but held up.

57th min: Controlled grubber-kick by Nu Brown, Jayden Walker seizes the ball and scores to the left of the posts. Converted by Nu Brown.

65th min: Tony Williams charges down a WT kick and regathers, a great effort for a big man.

67th min: Try to Marshall-King to the right of southern posts.

Converted by Rankin. Wests Tigers back in the lead 24-20.

Second half has seen plenty of ball movement by both teams. Plenty of excitement for spectators.

7mins to go: Midfield to Jets. They need to get maximum value from this set.

Converted by Nu Brown from the sideline. Newtown hits the front 26-24.

3 mins to go: WT in possession and prepared to throw the ball around.

90 seconds left: WT have the ball again but Jets hold on for an important win.

Ryan Selvage from the NSWRL interviewed big Sam Tagataese after the game:  http://www.nswrl.com.au/news/2017/03/26/tagataese_there_s_pr.html

How the NSWRL reported on the game:  http://www.nswrl.com.au/news/2017/03/25/jets_rise_late_to_ex.af_intrust-super-premiership-nsw_news1.html

All the 4th round ISP NSW match results plus the updated competition table:  http://live.nswrl.com.au/comp/3ec60a38ee446fb80

This match will be televised live on Fox Sports.