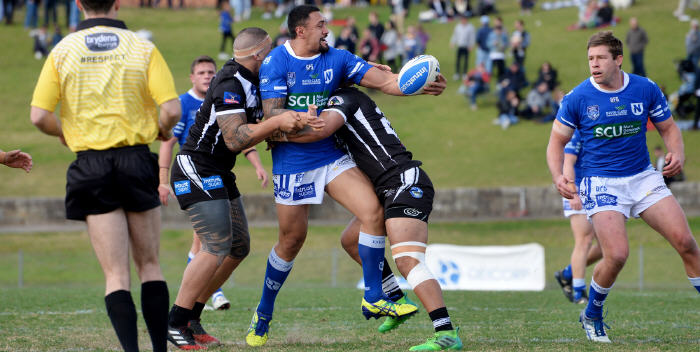 Newtown Jets backrower Kenny Niko looks to get the ball away to his team-mate Jeremy Latimore in last Saturday’s match against Wentworthville at Henson Park. Photo: Michael Magee Photography.

The Jets have a bye this weekend, but here’s all the latest in Newtown RLFC news

This year’s BFFF Day at Henson Park looks like being bigger than last’s inaugural Festival occasion.

There are more breweries and food outlets booked to be in attendance, plus there will be plenty of children’s entertainment – a petting zoo, jumping castle and face painting.

And above all, the Jets are at home to the team currently in second place on the Intrust Super Premiership (ISP NSW) competition table, the fearsome New Zealand Warriors.

The Festival gets underway at 12 noon and the rugby league match details are:

Kurt Dillon has once again made the ISP NSW Team of the Week. This young man is having a truly magnificent season:  http://www.nswrl.com.au/news/2017/07/14/isp_nsw_team_of_the_.html

Here’s what the NSWRL had to say about his performance last Saturday against Wentworthville:

19 total runs, 203 total metres, 76 post-contact metres, 40 tackles.
Despite being on the wrong end of the scoreline once again, Kurt Dillon’s efforts never ceased to amaze as he put in a powerful 80-minute stint. His strong carries through the middle third saw him crack over 200 metres once again, but his defensive efforts were the cornerstone of another tireless performance that saw him make 40 tackles.

And here are the match statistics from the Newtown-Wentworthville game:  http://www.nswrl.com.au/content/dam/nswrl/documents/isp-stats-reports-2017/Rd18-JetsMagpies.pdf

The Newtown club’s quest for a new Jet Man received this coverage in the Central Sydney Magazine:  http://www.dailytelegraph.com.au/newslocal/central-sydney/are-you-the-next-jetman-newtown-jets-seek-new-talent-for-mascot/news-story/07ecd0b2ec3f8aad2b701da7fb014295

And the Jet Man cult reached new heights with the Jets general manager Stuart McCarthy being interviewed about the club’s quest for the new Jet Man on ABC Local 702 on Friday morning, 14th July. We hope to have an audio clip of this interview available next week.

Don’t forget there are some terrific new lines available in Jets clothing and merchandise available online through www.newtownjetsclothing.com.au , or by emailing info@newtownjets.com, calling 8488 8211, making your selections at the merchandise marquees at Newtown Jets home games at Henson Park, or at the Jets marquee in front of the Newtown Mission in King Street, Newtown (opposite the Dendy Cinemas) on selected Saturdays.