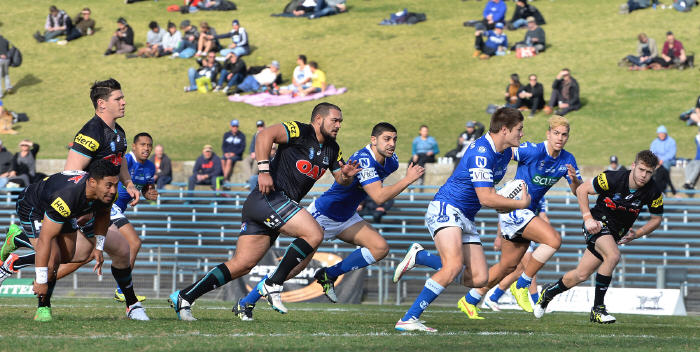 Newtown Jets took Penrith, the defending Premiers and joint competition leaders, all the way on Saturday only to have victory snatched from them just two minutes from full-time. The Jets had led 12-6 at half-time, trailed 16-12 midway through the second half and then grabbed an 18-16 lead with twelve minutes left to play. The Panthers’ 20-18 win leaves Newtown still with an outside mathematical chance of making the final eight, but with the odds stacked against that possibility.

Newtown were forced to defend in the opening minutes on Saturday and then scored through five-eighth and captain Blake Ayshford in the fifth minute, with Todd Murphy’s conversion giving the Jets a 6-0 lead. Penrith had a lot of ball for extended periods in the first half, and this weight of possession told in the 25th minute when the Panthers equalised at 6-all. At one stage Newtown had the use of the ball for three sets out of sixteen, throwing enormous pressure on the home-team tacklers. The Jets defence remained staunch and some welcome possession late in the first half saw Murphy and Ayshford lay on quality ballwork for a 38th minute try to Nathan Gardner in the south-eastern corner. Murphy kicked a magnificent goal from the sideline and into a strong breeze to give Newtown a 12-6 half-time lead.

Coach Greg Matterson praised the Jets at the half-time break for their committed defence, good on-field communication and willingness to work as a team. Penrith had the use of the wind in the first half, had been at Newtown’s end on several occasions, and still had only come up with the one try. Matterson emphasised to his men that it would be “those one per cent extras” by every player that would prove to be decisive in the second half.

The second half was a somewhat disappointing performance by the Jets who had so much to play for. There was too much one-out play with the ball and the team seemed to have gone into its shell. The Panthers again had a lot of possession and finished with a commendable 95 percent second half completion rate. Newtown was rarely at Penrith’s end and on the sole occasion the Jets put together a good attacking set they scored the try that gave them back the lead. Penrith had a lot of strength and speed in their outside backs and often looked threatening. The Panthers scored tries in the 50th and 57th minutes and established a 16-12 lead. Newtown’s best attacking foray saw an excellent run and off-load by backrower Junior Roqica, and then halfback Murphy chanced his arm with an audacious chip-kick and regathering effort that saw him score under the northern end posts. The Jets bravely defended this 18-16 lead but gave Penrith chances to get the ball back down into Newtown’s end. The Jets were ultimately brought undone by individuals not sticking to the team’s defensive structure and the Panthers seized their opportunity two minutes from full-time.

Team captain Blake Ayshford was always dangerous with the ball and probably needed more opportunities to challenge the Penrith defence. Front-rower Malakai Houma had a strong first half and fullback Daniel Abou-Sleiman maintained his good form. It was a brave collective effort from the Jets but it all ended cruelly for them so close to full-time.

The Newtown Jets travel to Remondis Stadium this Saturday (22nd August) when they will play the Newcastle Knights in the main curtain-raiser to the Cronulla Sharks-Wests Tigers NRL fixture. The Newtown-Knights 24th Round NSW Cup match is timed to start at 12.40pm, and will be televised live on Fox Sports One.