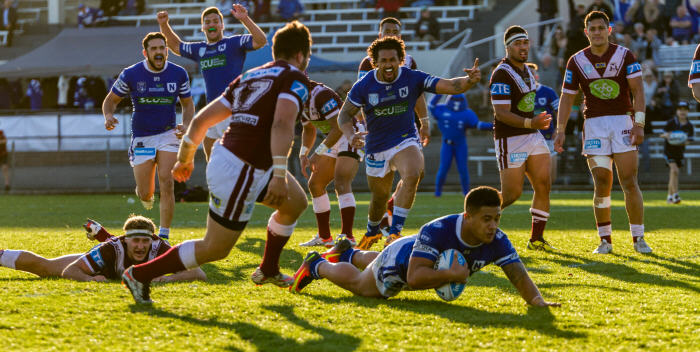 Newtown Jets half-back Fa’amanu Brown weaves his way through the Manly-Warringah defence to score the equalising try in the 78th minute. His subsequent conversion gave the Jets a near-miraculous 40-38 win over the men from the Peninsula. Photo: Mario Facchini Photography

The Jets turn on a Reunion Day tour de force

Report on the 25th Round ISP NSW match between Newtown and Manly-Warringah, played at Henson Park on Saturday, 27th August 2016 by Glen ‘Bumper’ Dwyer.

In what might have been the greatest-ever come-from-behind victory seen at Henson Park, the Newtown Jets defeated Manly-Warringah 40-38 last Saturday. The Jets had trailed the Sea Eagles 26-12 at half-time and 38-12 with less than twenty minutes left to play. Playing in front of an exuberant club Reunion Day crowd, Newtown scored five unanswered tries in the last eighteen minutes and guaranteed themselves a top four finish in the Intrust Super Premiership.

To put this result in some perspective, the Jets were in fourth place up against Manly-Warringah who were in 11th position, and with no chance of making the top eight. Newtown came into this game with a lot of late team changes and a disrupted preparation, and an upset result was always a possibility.

The Jets scored a converted try early in the first half and then fell into an extended sub-standard performance where they had very little possession, made repeated fundamental errors and conceded several penalties. The Sea Eagles made the most of their opportunities and ran up a 26-6 lead by the 30th minute, with Newtown scoring a second converted try five minutes from half-time to go in at the break 26-12 in arrears.

Jets coach Greg Matterson admitted after the game that bearing in mind the impact of the late changes to Newtown’s team line-up, he was prepared for the worst in the second half. He emphasised to his players at half-time that they had scored two converted tries with very little possession, and he urged them to put more pressure on Manly’s kickers, to lift their work-rate and back up every break that was made.

Manly added two converted tries to their half-time lead and looked to be set for a runaway win. Newtown had put some pressure on the Sea Eagles at their end but Manly’s defence had held solid. The final twenty minutes have already been added to Newtown’s rich store of folklore. Jets hooker and captain Matt McIlwrick scored in the 62nd minute, and when he crossed for his second try eight minutes later which Fa’amanu Brown converted, the Jets’ collective self-belief surged and they started to play like a team with genuine purpose.

The big crowd on the northern hill was in uproar when stand-in fullback Corin Smith backed up a break by Junior Roqica to score under the northern end goal-posts, and Brown’s conversion made it 38-28 with eight minutes to play. The incredible fightback rolled on when makeshift backrower Travis Robinson touched down under the posts two minutes later, and another conversion by Brown had Newtown trailing 38-34 with five minutes remaining. The Jets forwards were making ground at will and Manly’s defence, so strong earlier in the second half, had become disorganised and ineffective. As if by some grand design, two minutes from full-time Fa’amanu Brown sent Manly defenders the wrong way and cut through to score near the posts. His conversion put Newtown into the lead by 40-38 and sent the crowd into partisan ecstasy. The Jets survived a late flurry from Manly to pull off one of the greatest rugby league escape acts likely to be seen at Henson Park.

The Jets coaching staff praised Matt McIlwrick’s leadership and work-rate, and also the tireless eighty-minutes turned in by young front-rower Kurt Dillon. Junior Roqica ran riot in the last twenty minutes and played a big role in Newtown’s resurgence, while the hard-working Anthony Moraitis was also one of Newtown’s best on the day.

Saturday’s win now goes into the annals of history and the Jets must prepare for a Qualifying Final against the minor premiers, Mounties, next Saturday (3rd September) at Pepper Stadium, Penrith at 1.00pm. Newtown will be marshalling their forces this week with several injured players becoming available for selection again.