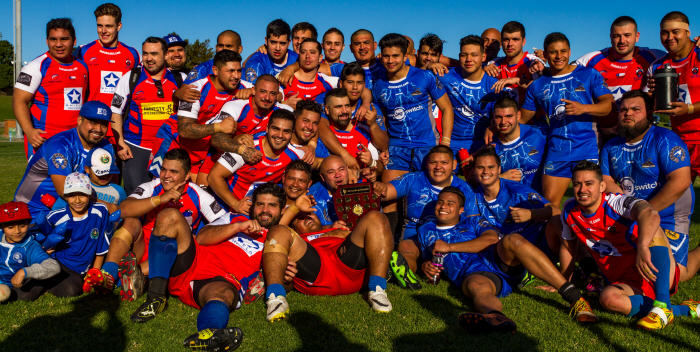 The Newtown Rugby League Football Club proved itself to be a good corporate citizen of the Rugby League world, when Henson Park hosted a quite extraordinary (and heart-warming) display of Rugby League football, Latin American style, last Saturday.

Ecuador and Colombia began the day with a game of Sevens, with the flamboyant Ecuadorians claiming El Escudo del Norte, the Shield of the North.

The second curtain-raiser was an entertaining Nines match between Uruguay and Peru, with the Uruguayans taking possession of El Escudo del Sur, the Shield of the South.

The main curtain-raiser was a full-length Rugby League international (two forty-minute halves), the first ever staged between two Latin American nations, between Chile and El Salvador. Both countries have known enormous social and economic turmoil in the 20th century and many of the players had either come to Australia as refugees themselves, or are the sons or grandsons of people who had fled their homelands torn apart by civil war and the cruel rulership of neo-fascist regimes.

Chile showed that they have the makings of a very competitive national Rugby League team in defeating a gallant El Salvador team 58-20, thereby winning the evocatively-named El Escudo del Desafio, the Shield of Defiance.

Last week’s Rugby League Week (Thursday, 9th June) ran a double-page spread on pages 32 and 33, “Queenslanders give league a Latino leg-up”, which focused on some of the personalities who were going to play in the Chile-El Salvador international match.

Saturday’s Daily Telegraph (11th June) ran this moving human interest story on one of the El Salvador players, Fredy Arteaga-Figueroa, on how Rugby League football and the friends he has made through the game has enabled him to rebuild his life in his adopted country: http://www.dailytelegraph.com.au/sport/nrl/rugby-league-helps-fredy-arteagafigueroas-fight-to-flee-from-heroin-hell/news-story/96d0c5d24a00fee44deca7fbbfcad6df

Grand old Henson Park, for so long an Anglo-Celtic cultural enclave, has never known such exotic influences such as the stirring Central American and South American national anthems ringing out from the sound system, the Spanish language conversations and excited barracking, plus the food stalls with interesting new taste treats. And not to mention the Chilean Easter Island dancing girls troupe who made a truly sensational appearance, with Henson Park ground announcer John Lynch later claiming that he thought he might have to make a beeline to the Royal Prince Alfred Hospital cardiac arrest unit!

Newtown’s new Latin American Rugby League friends made a terrific debut at Henson Park, and along with their many supporters we hope that they will be back again in 2017.