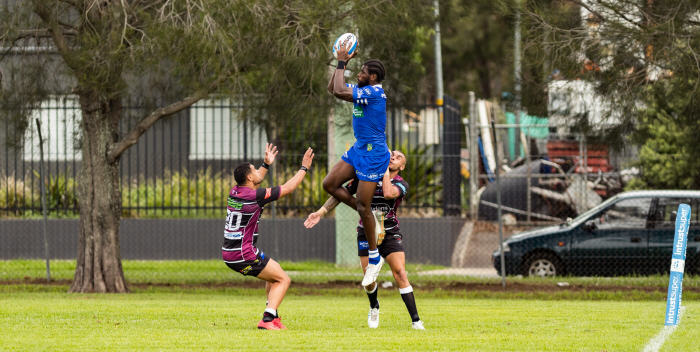 There might not be many spectators in the background, but Newtown Jets winger Edrick Lee showed all the poise and athleticism of a top-class NRL player in scoring this try right on half-time last Sunday. Five-eighth Kyle Flanagan had put the perfectly-flighted kick into the corner for Edrick to leap for and catch. Photo: Mario Facchini (MAF Photography)

The Newtown Jets are back on mainstream free to air television in a Minor Premiership game for the first time in 35 years!

The Jets travel to the foot of the Blue Mountains this Saturday to take on last year’s ISP NSW premiers and State Championship winners, Penrith Panthers. This game will be shown live on Channel Nine at 1.00pm, making it Newtown’s first appearance on free to air in a Minor Premiership TV clash since 1983. This is a fixture of considerable importance to both clubs.

This match will be televised live on Channel Nine from 1.00pm.

It will also be broadcast live on Hawksbury 89.9 FM

Braden Uele made his debut with Newtown last Sunday against Blacktown Workers Sea Eagles. This New Zealand-born front-rower played his junior rugby league with the Point Chevalier and Glenora clubs in Auckland before signing with the Sydney Roosters. Braden is 23 years old, 191 cm in height and weighs 115 kg. He represented the Junior Kiwis in 2014 and 2015 and transferred from the Roosters to the North Queensland Cowboys in 2015. He made his NRL debut with the Cowboys in 2017 and is currently on a two-year contract with the Cronulla Sharks.