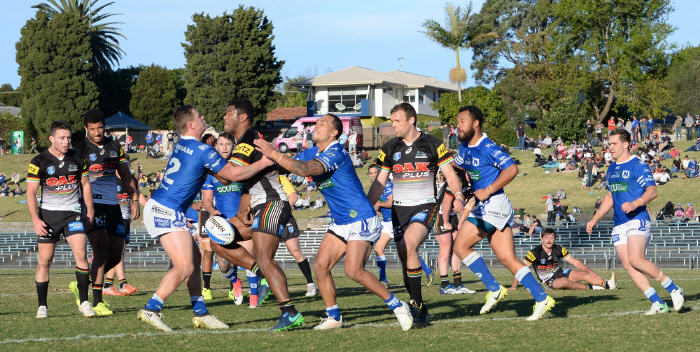 It looks like this Penrith Panthers player has lost the ball last Saturday at Henson Park – and in any case there were several Newtown Jets players on hand (from left to right): Jack Williams, Kurt Kara, Joseph Paulo and Adam Clydsdale. Photo: Michael Magee Photography

Playing for pride has always been a good motivation factor for the men in royal blue. Be sure to get along to Henson tomorrow afternoon to give our boys plenty of support.

Watch out for a big game from Newtown centre Reubenn Rennie, who comes up against one of his former clubs tomorrow.

Edrick Lee is always a great favourite with the various media outlets and he was interviewed for Jets TV after last Saturday’s game:   https://www.youtube.com/watch?v=yLZXPQ5FDes

This is the last call for next Tuesday night’s function, The University of Rugby League Part Two: The Fourth Estate, at Petersham RSL Club, Tuesday, 22nd August, 7pm for 7.30pm. Jimmy Smith from the Big Sports Breakfast and Fox Sports is the latest addition to what already is a talent-packed interview panel. Book now with Stuart McCarthy on 0447 046 516 or smccarthy@newtownjets.com  For more information about the night:  http://www.newtownjets.com/the-university-of-rugby-league-part-2-the-fourth-estate/

It’s our final SCU – More Generous Banking FAMILY DAY for the season so there will be plenty of fun for the kids on the DEICORP Family Hill featuring jumping castles, face painting, pass the ball, Ice Cream Joe’s Mr. Whippy & Barista along with our favourite mascots JET MAN & SCU’s Syd the Pig.

Our good friends at Crust Pizza Dulwich Hill have a special post Henson Park home game offer just for you! Wear your Jets gear and grab 2 large Pizzas + a Starter + 1.25L bottle of soft drink for just $39 – that’s 25% off the recommended retail price. You’ll also receive a free game day pass to the next Jets’ home game. Pick up before 6pm at 544 Marrickville Road, Dulwich Hill. You can also phone in your order prior to pick up on 9560 9900.