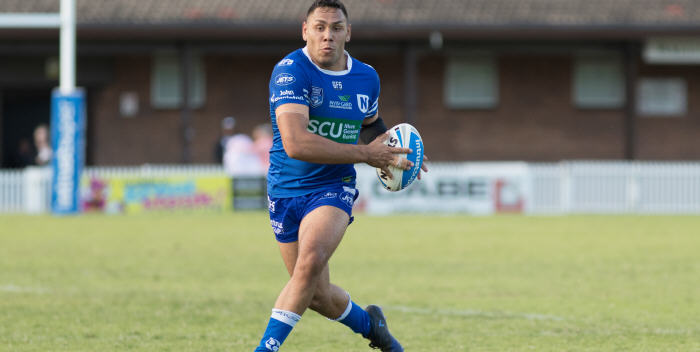 Newtown Jets centre Jesse Ramien (pictured) has won selection in the Junior Kangaroos to play the Junior Kiwis on Friday, 5th May at GIO Stadium, Canberra. Jesse is a product of the Coonamble RLFC in north-western NSW. Photo: MAF Photography

The Newtown Jets aren’t playing this weekend but you can still see several players involved with the Jets in 2017 playing on Friday, Saturday and Sunday

Jesse Ramien is playing for the Junior Kangaroos v Junior Kiwis, Friday, 5th May at 3.15pm, live streamed on NRL.com

Tony “The T-Rex” Williams is playing for Tonga v Fiji, Saturday, 6th May on Fox League at 5.30pm

Fa’amanu Brown is playing for Samoa v England, Saturday, 6th May on Fox League at 7.30pm

And Newtown’s super veteran, front-rower Khalid Deeb, has received a recall to international rugby league. He will be playing for Lebanon v Malta at the New Era Stadium, Cabramatta on Saturday, 6th May at 7.30pm.

This match is the first leg of the 2017 Frank Hyde Shield series.

The Newtown RLFC regrets to announce the recent passing of a long-time club sponsor, supporter and loyal friend – Bill Elliott. Bill had many friends in Newtown Jets circles and he was always a popular figure at games and club functions. He will be greatly missed. Our sincere condolences to his wife Bev and son Brett. His funeral service is to be held on Tuesday, 9th May at the South Chapel, Eastern Suburbs Memorial Park, Botany.

With the various representative games being played this weekend, for the first time in several years Newtown isn’t represented in the Cook Islands national rugby league team. The Kukis play Papua-New Guinea at Campbelltown Stadium this Saturday, 6th May at 3.00pm. In the 2013 Rugby League World Cup tournament, there were no less than eight players in the Cook Islands squad who had played for Newtown at some stage of their careers. The first person to correctly name any five of those eight players will receive an item of 2017 Newtown Jets merchandise. Please send your email answers to: jets@newtownjets.com