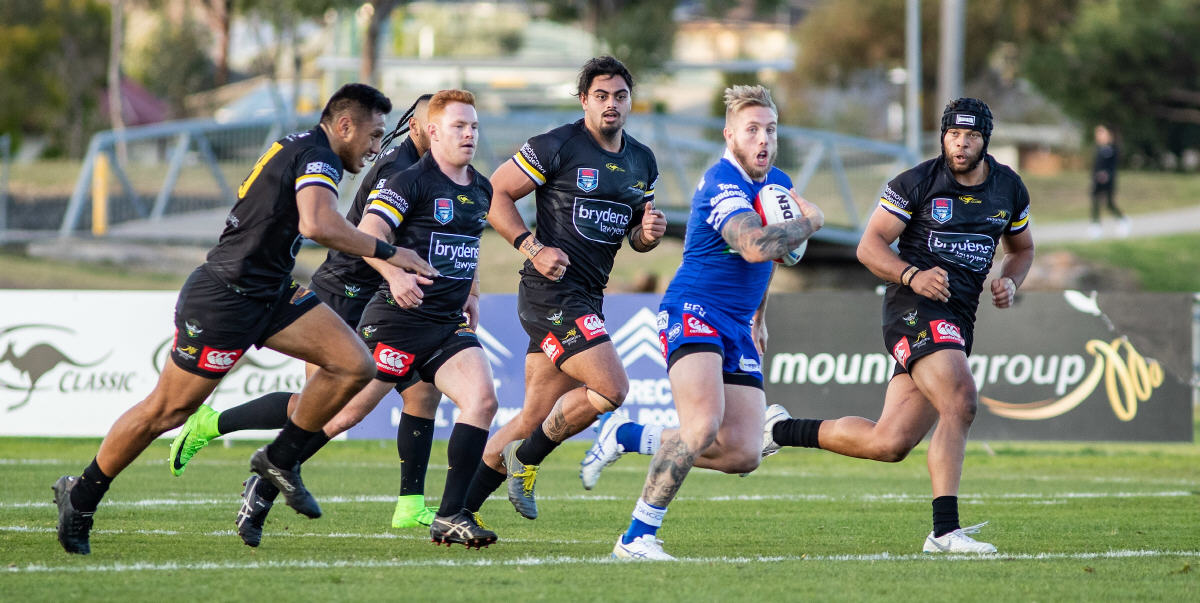 The race is on as Newtown’s winger Aaron Gray is pursued by a posse of Mounties in the Canterbury Cup NSW match played on Saturday afternoon. Photo: Mario Facchini, mafphotography.

The Newtown Jets claimed another impressive scalp in the Canterbury Cup NSW competition, when they defeated second-placed Mounties by 34-20 on Saturday afternoon at the Aubrey Keech Reserve, Hinchinbrook.

The Jets had a tight grip on this result when they ran up a 22-4 lead by half-time, with the tries being scored by winger Sione Katoa, halfback Braydon Trindall, front-rower Jimmy Jolliffe and second-rower Josh Carr. Newtown increased this lead early in the second half by way of a sensational long-distance try to Sione Katoa.

Mounties had a bigger share of possession in the second half and pulled back to trail 28-14 with eighteen minutes left to play. Jets hooker Craig Garvey and lock Billy Magoulias combined to lay on a superbly-worked try that took Newtown out to a 34-14 lead, a points advantage that was unlikely to be run down in the time remaining.

There is a general bye in the Canterbury Cup NSW competition next weekend (22nd/23rd June). Newtown’s next game is against the in-form Canterbury-Bankstown Bulldogs on Sunday, 30th June at 1.50pm.

There is a general bye in the Canterbury Cup NSW competition on the weekend of 22nd/23rd June.

This match will be a curtain-raiser to the Bulldogs v Sharks NRL fixture at 4.05pm.