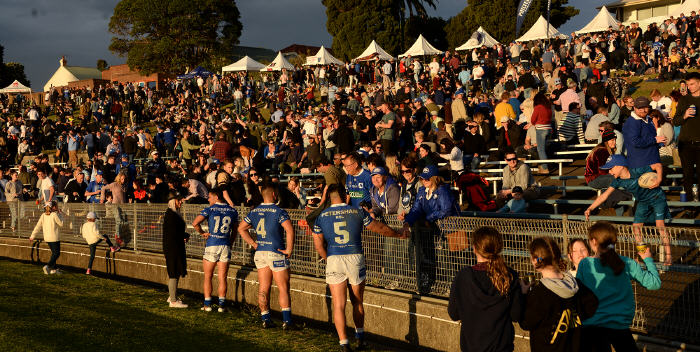 The Newtown Jets and their rugby league partnership club the Glebe Dirty Reds had their final training session on Thursday evening (20th December) at the Mahoney Reserve in South Marrickville.

The session included a full-on scrimmage session which was ended by the arrival of a savage rain and hail storm.

The pre-season squad will now enjoy a Christmas/New Year break and will resume training on Monday, 7th January.

The Newtown Jets clothing and merchandise marquee is open for business in King Street, Newtown on Saturday, 22nd December and Monday, 24th December from 10.00am to 4.00pm. You’ll find the big royal blue marquee directly opposite the Dendy Cinema complex.

Check out the terrific new range of Jets merchandise items on this link:
www.newtownjetsclothing.com.au

How appropriate that the Jets merchandise marquee should be located in King Street – the very nerve centre and major artery of the traditional Newtown rugby league district since the 8th January, 1908!

Now’s the time to either renew or take out a Newtown Jets membership package for 2019:
Please go to this link for all the information about all the different packages:  http://www.newtownjets.com/2019-season/jets-membership-2019/

A new signing for the Newtown Jets is Pio Nakubuwai, a fullback/winger from the Victoria Thunderbolts, who play in the QRL Hastings Deering Under 20s competition, the Queensland equivalent of the NSWRL Jersey Flegg Cup competition.

Good luck to a former Newtown Jet, Mark “The Tookster” Tookey, who was a very popular identity when he played with the Jets back in 2000. Mark was recently appointed as the non-playing coach of the Oakey Bears, who play in the strong Toowoomba Rugby League district competition in southern Queensland.

We look forward to seeing you all again in 2019.