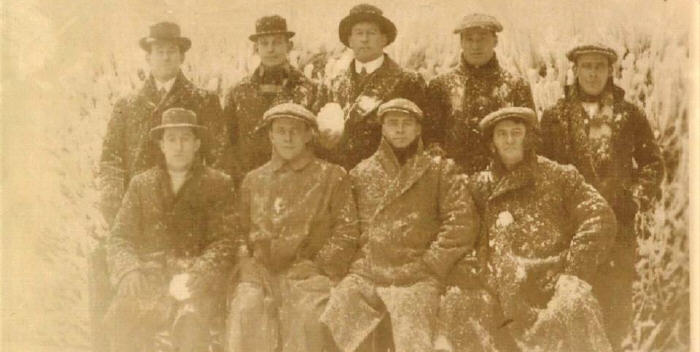 This wonderful image from the 1911-12 Kangaroo tour shows the seven Newtown players that went on the trip as well as the two other members of the club that accompanied the team as official visitors. They are - Back Row: Billy Noble, Doug Nelson (visitor), Paddy McCue, Joe Murray, Bill Farnsworth; Front Row: Webby Neill, Viv Farnsworth, Charles “Boxer” Russell, Tom Woolford (visitor) The photo appears to have been taken in the midst of a snowball fight, given the dusting on their coats and the fact that McCue and Neill are both still holding snowballs, ready to resume action! This atmospheric photo was supplied by the National Rugby League Museum, Driver Avenue, Moore Park.

The Newtown RLFC was established at a meeting held on the evening of the 8th January 1908 at the Newtown Town Hall.

The Newtown Town Hall still stands at 1 Bedford Street, Newtown – directly opposite the Newtown railway station. The room in which the foundation meeting was held still exists, and the club held its 100th anniversary celebration in that very same meeting room back in 2008.

The club enters its 111th season of rugby league football in 2018 as a well-respected member of the Intrust Super Premiership NSW, the flagship competition of the NSW Rugby League.

As it happens, the 2018 pre-season training squad resumes training on Monday, 8th January 2018. The boys have just enjoyed a short break for Xmas and New Year and will get back into some tough sessions as they get ready for the upcoming pre-season trials.

The Jets’ new Ron Massey Cup partnership club, Glebe-Burwood RLFC, will be playing in the main curtain-raiser at Wentworth Park on that same day, 11th February. Wentworth Park was the home ground of the Glebe Dirty Reds, who made a truly amazing return to the active rugby league ranks in 2017.

As we rapidly approach the new rugby league season, now’s the time to check out what’s available at the Newtown Jets online clothing and merchandise catalogue. The link to the Jet merchandise website is: www.newtownjetsclothing.com.au

Club membership packages for 2018 are available and you can acquaint yourself with all the details by going to this link:  http://www.newtownjets.com/jets-membership-2018/

The Newtown RLFC is pleased to extend New Year greetings to all of its members and supporters everywhere.