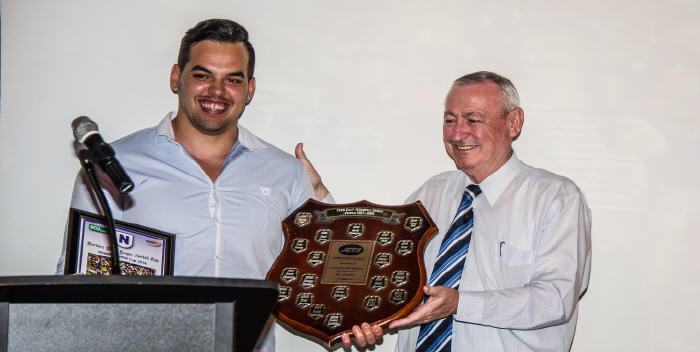 The Rhino bows out on a high note from the Newtown Jets.

The front-rower colossus and Henson Park cult figure Ryan Verlinden ended his five-year association with the Newtown Jets in fine style at the club’s 2014 Presentation Night.

Popularly known as “The Rhino”, the affable giant won the prized Fred Daly Memorial Shield, awarded each year to the Jets player deemed to have made the greatest all-round contribution to the club in that season. Verlinden not only played the most NSW Cup games for Newtown in the recently completed season, but he was noted for his positive contribution to the club’s activities off the field as well. He scored some memorable tries in 2014 and was a great favourite with the denizens of the Henson Park Hill, who took a great liking to his buffalo-like charges and his ability to scatter opposition defences. Henson Park’s loss is South Yorkshire’s gain as Verlinden has recently signed a two-year deal with the English Rugby League club Featherstone Rovers. Those flint-hard characters who follow the famous Rovers are sure to become fans of the big fellow and his midfield surges with the ball.

Another top-level award recipient at the Presentation Night was another member of the Jets heavy artillery brigade, Saulala Houma. He won the blue-ribbon Best and Fairest award, and was also rated by the NSW Rugby League as being Newtown’s VB NSW Cup player of the year. Houma has been on a full-time contract with the Sydney Roosters club and has recently signed professional forms with the Cronulla-Sutherland RLFC. The Sharks are of course Newtown’s new partnership club for the next three years.

The long-time Jets Director and major financial benefactor Terry Rowney won the Club Person of the Year award and received a big ovation from the crowd. Newtown’s General Manager Stuart McCarthy noted that Terry Rowney has been working tirelessly for the Newtown Jets cause for the past 35 years and could well have won this award in every one of those years!

Other awards were made to the club’s valuable sponsors, staff members and volunteers (see full list of award recipients below).

Full details will soon be released regarding the club’s popular annual golf day, the Bumper Farrell Spring Classic, which is to be held at the Marrickville Golf Course on Friday, 24th October 2014.

This year’s Presentation Night was also an opportunity for the Newtown Jets to say farewell to their Rugby League partners for the past nine years, the Sydney Roosters, and to look forward with optimism to the club’s new joint venture with the Cronulla-Sutherland Sharks. Several speakers on the night pointed out how successful the partnership with the Roosters had been and how many life-long friendships and abiding memories had been made.