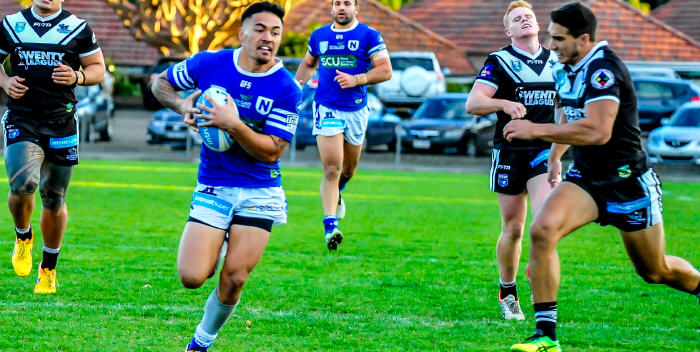 The Warriors moved into first position on the Intrust Super Premiership NSW competition table after their narrow win against the Newcastle Knights last Saturday, while the Newtown Jets had their biggest home game victory in eight years in crushing Wentworthville 54-6. The Warriors beat Newtown 20-18 back in Round 3 at Mt Smart Stadium, after the Jets had led 18-4 at half-time.

The New Zealand Warriors team has been announced as:

After the Newtown Jets-New Zealand Warriors main game on Saturday, all Jets friends and supporters are invited back to the Golden Barley Hotel on the corner of Edgeware Road and Llewellyn Street, Enmore.

There will be NSWRL Tertiary Rugby League curtain-raisers at Henson Park this Saturday from 11.15am.

The Newtown Jets-New Zealand Warriors match will be broadcast live on Steele Sports, www.steelesports.com.au, from 3.00pm AEST on Saturday and from 5.00pm NZT.

Here is the ISP NSW competition table after 14 rounds:  http://www.nswrl.com.au/intrust-super-premiership-nsw/ladder1.html

Make sure you subscribe to our new YouTube Channel for all the latest Newtown Jets video updates and interviews. The Newtown Jets Channel is the YouTube home of Australia’s oldest Rugby League club: https://www.youtube.com/channel/UCavSFxlrLGYm_hsnw-mtLPQ

Melissa Shaw was the winner of last week’s quiz. She named these three players as having been current or former Newtown Jets players who were members of the 2013 Cook Islands Rugby League World Cup squad: Tinirau Arona, Dylan Napa and Chris Taripo. The other five former Jets in the 2013 Kukis squad were: Sam Brunton, Daniel Fepuleai, Jonathon Ford, Dominique Peyroux and Brad Takairangi. There’ll be another Jets quiz next week.

Tom Symonds was a popular and very effective player with the Newtown Jets on many occasions during the club’s partnership with the Sydney Roosters. Tom has recently transferred from Manly-Warringah to the Huddersfield Giants in the UK Super League. The George Hotel in Huddersfield was where the Rugby League game was officially formed on the 29th August 1895. Everyone at the Jets wishes Tom well at his new club.

Another name from the past – a young Aaron Sweeney made his debut in senior Rugby League with the Newtown Jets back in 2003. He was nicknamed “The Sweeney” in his time at Henson Park and he has been at quite a number of clubs in the intervening 13 years. There is a supportive article on Aaron in this week’s Rugby League Week, 16th June, pages 30 and 31. We wish “The Sweeney” success with the Camden Rams in Group 6.