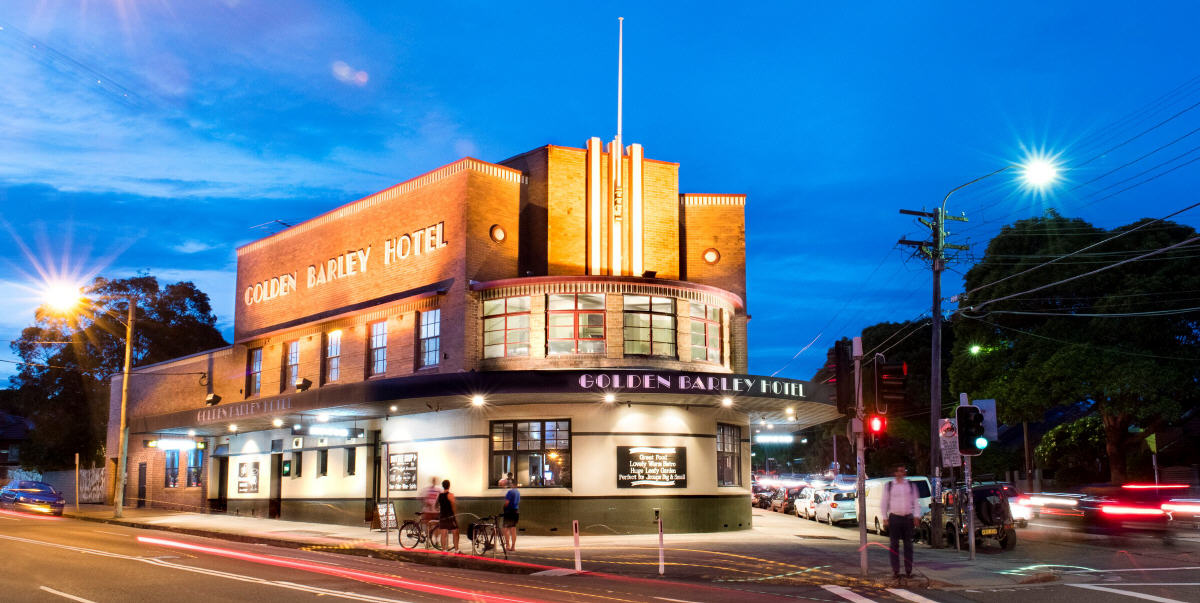 This week’s sponsorship tribute is to the management and staff of the Golden Barley Hotel, Enmore

The popular Golden Barley Hotel is located on the corner of Edgeware Road and Llewellyn Street, Enmore and is renowned far and wide for its magnificent Art Deco architecture.

This establishment is famous for its great range of beers, friendly service, comfortable lounges and leafy beer garden. The bistro is a great drawcard as well.

The Golden Barley is under the management of Andrew and Penny Hewlett and they have been staunch sponsors of the Newtown Jets since the early 2000s.

Without the ongoing support of businesses such as the Golden Barley Hotel, our club could not continue to put on the high standard of rugby league entertainment that so many thousands of people enjoy each year at Henson Park

Lifelong Newtown Jets supporter Gavin Gordon has hosted well-attended Trivia Nights at the Golden Barley for the past 21 years.

Another feature of the Golden Barley is the splendid Newtown Jets wall mural at the back of the hotel in Llewellyn Street, Enmore.

The Newtown Jets resumed training last week, and here’s an update of their 2022 pre-season training program from none other than the Jets’ long-serving head coach Greg Matterson.

The squad and team staff met on Monday at Camperdown Fitness, 63-65 Pyrmont Bridge Road, Camperdown. (Website link:  https://www.camperdownfitness.com.au/  ) and the second session was on Tuesday afternoon at Mahoney Reserve, South Marrickville.
The following are listed as members of Newtown’s 2022 pre-season squad. (As previously advised, some are training with the Cronulla Sharks NRL pre-season squad’s program.)

The Rennie bothers, Reubenn and Vincent, have agreed to terms with the Newtown RLFC for 2022);

Rhys Davies (ex-Wentworthville and Parramatta halfback and hooker) and Charbel Tasipale (a former 2021 Parramatta NSW Cup second-rower who has agreed to terms);

Two 2022 trial matches have been arranged, with the dates and kick-off times still to be confirmed:
versus Mounties (February 12); versus Canterbury-Bankstown (February 28th).

The precise match details for these trials will be made known to Newtown Jets supporters when they are confirmed.