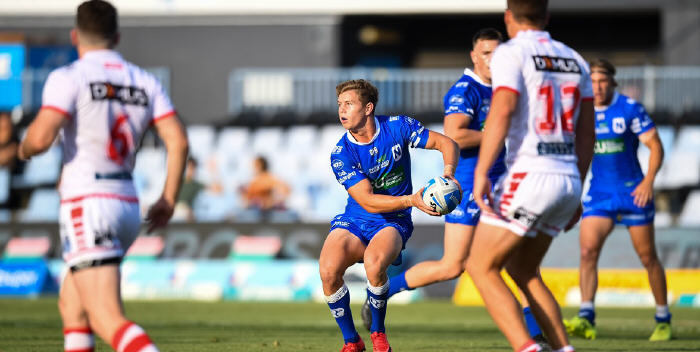 Hooker Blayke Brailey (with the ball) has been in fine touch in his first two games with the Newtown Jets. Photo: Courtesy of the NSW Rugby League.

Jets hooker Blayke Brailey had impressed in his debut performance for Newtown last weekend, and he maintained his quality form with another excellent showing yesterday evening. Brailey’s service from dummy-half was crisp and efficient, and he sliced through the Dragons’ defence for an important try in the 60th minute. Jets lock forward Jack Williams is showing the sort of form that won him awards in his time at the Canberra Raiders.

Newtown had to work hard for this win and only secured the competition points through a try to front-rower Wes Lolo in the 75th minute.

This match was played as the main curtain-raiser to the Cronulla Sharks-St George Illawarra Dragons NRL local derby, and the Sutherland Shire crowd would have been impressed with the Jets as they wrapped up this result. The Jets won the Tom Kirk Cup last night, with the contest for this trophy continuing on from the previous Newtown Jets-Illawarra matches played between 2013 and 2017.

The Jets’ next match is away to Blacktown Workers Sea Eagles on Sunday, 25th March at 3.00pm. The extended gap between the second and third rounds could prove to be beneficial as some Jets players pulled up the worse for wear last night.