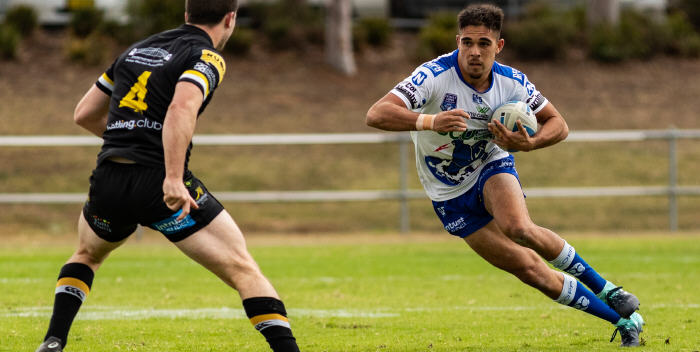 Newtown Jets fullback Will Kennedy (pictured) scored two tries against Mounties on Saturday. His second try on Saturday could well be a contender for the award of best individual try scored in the ISP NSW competition in 2018. Photo: Mario Facchini (MAF Photography)

Underdog Jets stage an upset against the competition leaders

The Newtown Jets pulled off a major upset in defeating the Intrust Super Premiership competition leaders, Mounties, by 34-20 at Hinchinbrook on Saturday afternoon. The Jets went into this 10th round fixture as decided underdogs, but turned on an outstanding first half performance in establishing a 24-6 halftime lead.

There were several late team changes to the Newtown Jets line-up for Saturday. Winger and NSW under 20’s representative Isaac Lumelume came into the team to make his debut along with powerhouse wingman Charlton Schaafhausen from the Glebe-Burwood club. Lachlan Stein was a late withdrawal due to a hamstring injury and the experienced Trent Hodkinson was also unavailable to play. Jack A. Williams moved up from the interchange bench to partner Kyle Flanagan in the halves. Popular front-rower Malakai Houma was making his return to the Newtown Jets ranks after suffering a very bad leg injury in the 2nd round of the 2017 ISP NSW competition. Skilful second-rower Ryan King came into the second-row.

The Mounties team, noted for their physicality and with plenty of NRL experience in their ranks, fought back in the second half but never really threatened Newtown’s lead. The Jets played a clever brand of football, and they caused no end of trouble in the first half with their quick passing game and by creating repeated breaks through Mounties edge defence.

Coach Greg Matterson laid down a challenge to his players prior to the game that Newtown’s place on the competition table belied their genuine ability. Despite several late team changes, Matterson was confident that his players had the speed and the right tactics to outsmart the competition front-runners.

Newtown’s tries were all scored through the backs with two each to fullback Will Kennedy and winger Matt Evans, one each to centres Reubenn Rennie and Bessie Aufaga-Toomaga, plus one to halfback Kyle Flanagan. Wes Lolo, Blayke Brailey and Anthony Moraitis were the best of a Newtown forward pack that really took the contest up to their bigger opponents. This was Newtown’s first win against the Canberra Raiders partnership club since July 2014, and also Newtown’s first win at the Aubrey Keech Reserve.

The Newtown Jets are back at home at Henson Park next Saturday, 19th May, when they meet Wyong at 3.00pm.

MAGIC ROUND of matches: