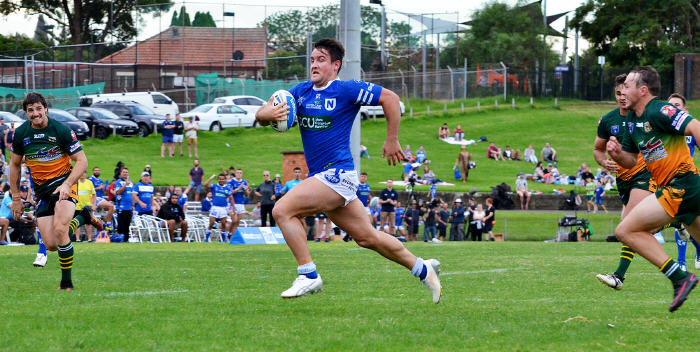 Newtown Jets second-rower Jayden Walker is pictured in full flight as he races away to score against Wyong at Henson Park. Photo: Michael Magee Photography

Upcoming clash with Bears is a must-win for the Jets

Valuable competition points plus the chance to go one-up in the 2017 Frank Hyde Shield series will be on the line for the Newtown Jets next Sunday, 14th May. The Jets are drawn to play North Sydney at North Sydney Oval, in a game they need to win to stay in touch with the Intrust Super Premiership NSW top eight.

The Jets have only won three of their nine competition games so far this season, although Newtown will have the advantage of having a run of home games at Henson Park in the second half of the competition draw. Next Sunday’s match is a tough proposition as the Bears are one of the better-performed teams this season and they are currently in fourth position.

The Frank Hyde Shield is contested on an annual basis between the Jets and the Bears, and both of these rugby league foundation clubs are very proud of their historic links with one of the game’s greatest personalities.

Next Sunday’s 10th round ISP NSW match at North Sydney Oval is timed to commence at 3.00pm.