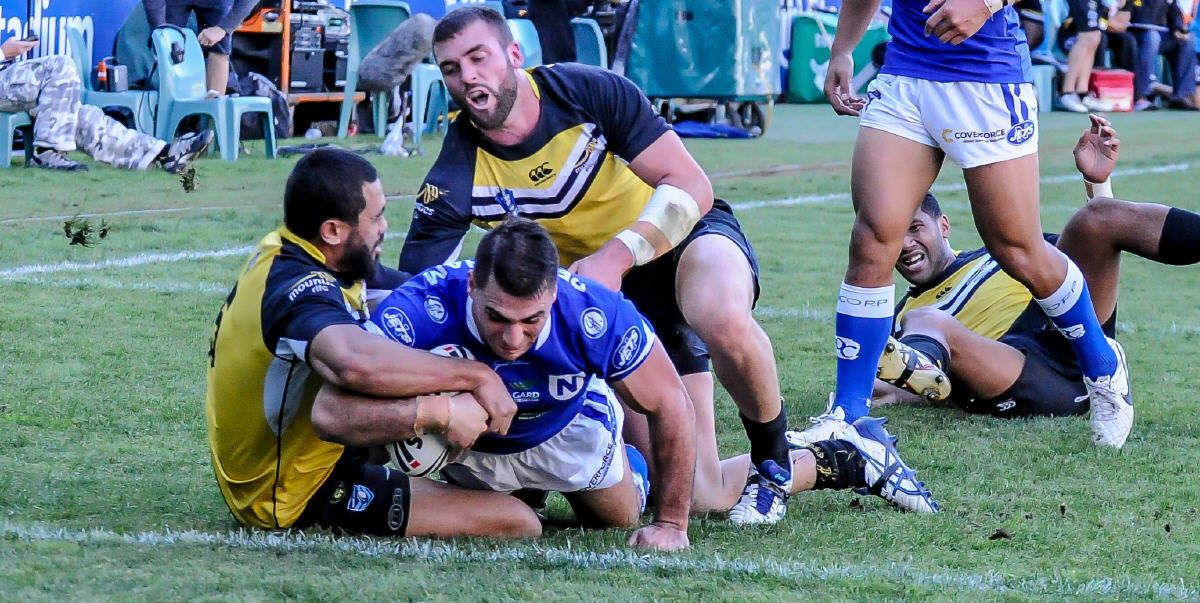 The powerfully-built Josh Davis goes in for the first of his two tries against Mounties at Allianz Stadium last Saturday. Photo: Gary Sutherland Photography.

Report on the Round 12 NSWRL VB NSW Cup match between Newtown and Mounties, played at Allianz Stadium on Saturday, 31st May 2014 replayed last Saturday at 3pm on JETS TV. https://www.youtube.com/watch?v=Wkdylmq77uA

The Newtown Jets made best use of the big stage at Allianz Stadium last Saturday, as well as being on live television across Australia and New Zealand. The Jets defeated third-placed Mounties by 36-18 after having trailed 18-4 midway through the first half. Newtown’s second half performance was notable for scoring five tries to nil, keeping their opponents scoreless and registering a high completion rate.

Newtown made an unconvincing start with a string of errors that resulted in a somewhat controversial 5th minute try to Mounties. The Jets responded ten minutes later when five-eighth Kurt Kara fired out a long pass to winger Josh Davis, who powered his way past three defenders for a determined try. The situation deteriorated for Newtown when the Mounties scored two tries in rapid succession midway through the first half to lead 18-4. A kick charge-down and regather by Brad Barrett led to the Jets backrower David Harris putting in a short kick near Mounties line and then regaining the ball to score. Centre Tautau Moga showed poise and strength as he shrugged off Mounties backline defenders to score wide out in the 38th minute. The Jets went in to the halftime break trailing by 18-14 but with the momentum of the game trending their way.

Errors by Mounties early in the second half gave Newtown some extended possession and favourable field position. Centre Matt Evans did very well to score in the northern left-side corner after the ball had travelled to him quickly through several pairs of hands. The Jets then survived some hair-raising moments when a Mounties high kick went uncontested at Newtown’s end, and also when Newtown turned over possession 25 metres from their own line.

The Jets took the lead for the first time at the 57th minute mark when winger Brett Lane finished another well-constructed and executed passing movement. Five minutes later Arana Taumata put through a well-flighted kick into the Mounties in-goal which was seized upon by Evans for his second try. Fullback Jonathon Reuben made it the fourth Jets try in the second half through the Mounties right-side defence to give Newtown a 30-18 lead with nine minutes left to play.

Newtown’s goal-kickers had little luck on the day with only one try out of eight being converted, but Arana Taumata kicked a penalty goal in the 75th minute to give the Jets a greater than two converted tries lead. Kurt Kara and Tautau Moga combined  well in the last minute of the game to send Josh Davis in for his second try, one that sent the Fox Sports commentators into raptures.

The Jets coaching staff gave special credit to an excellent second half performance by all the forwards, who rolled down the middle and gave the Newtown backs the field position that repeatedly brought dividends. Head coach Greg Matterson noted that the Jets forwards have a good mixture of youth and experience and most importantly, size and controlled aggression. David Harris had an outstanding match, and others to get special mention were Heath L’Estrange, Kurt Kara, Matt Evans and Josh Davis. Newtown clocked up an 85% completion rate in the second half and with a 6-1 penalty count in their favour had the type of stats count that wins big occasion matches. It was very gratifying for the coaching staff and supporters for the team to perform so well at Allianz Stadium and in front of a large television audience.

Newtown’s long march to defending their Canterbury Cup NSW & NRL State Championshp crowns continues (virtually) when the Jets take on the North Sydney Bears next Saturday at 3.00pm on JETS TV. We want you to follow our social media team on Twitter and join in!