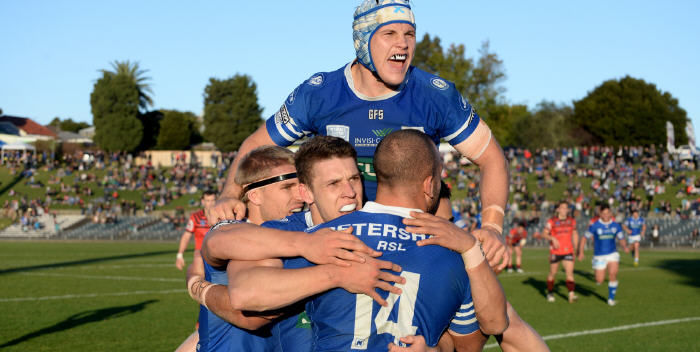 Newtown’s Jacob Gagan is surrounded by several Jets team-mates after scoring the winning try in the 79th minute on Saturday. Jacob is in the middle, along with (from the left) team captain Matt McIlwrick and Anthony Moraitis (number 14) and on top of the pile … a very animated Josh Cleeland. Photo: Michael Magee Photography.

Yet another white-knuckle finish for the Jets …. And this time they get the points

The Newtown Jets and North Sydney Bears turned on a thriller at Henson Park that did justice to the Frank Hyde Shield series and to the big crowd in attendance. Newtown was playing for a possible place in the top four, while the Bears were fighting for their lives to stay in the top eight. Norths led 6-4 at halftime and it was 12-all going into the last minute, when Jets winger Jacob Gagan won the race to safely ground a well-judged grubber kick by Arana Taumata into North’s in-goal.

Newtown has retained the Frank Hyde Shield for 2016.

The ISP NSW competition table, top points scorers and top try scorers after 24 rounds plus all the Round 24 results:  http://live.nswrl.com.au/comp/197

For your information, the full Newtown Jets team on the night of the 17th August 1996 at Parramatta Stadium was:

Alan also corrected me in my claiming that Ian Henderson is the coach of the London Broncos RLFC. That club’s coach is in fact Ian’s older brother Andrew Henderson. Thank you Alan!

Newtown kicked off running to the northern end of Henson Park.

The Jets put Norths under pressure in the opening minutes but didn’t score.

Penalties to the Bears at their end took the pressure off them.

Penalties continuing to punish Newtown and to give Norths territory and impetus.

The Bears were making ground midfield.

21st min: Tasi is injured and leaves the field.

Repeat penalties giving Newtown some time at the Bears end.

Norths showing good line speed in defence and the Bears are using every trick in the book to slow down Newtown’s play the balls.

26th min: Patrice Siolo (Norths) is sin-binned for repeated offences in the play the ball area.

28th min: Norths let off the hook – Jets lose the ball 10 metres out from the Bears try-line.

37th min: Jets on the attack and there appear to be opportunities out to the left-side, but Josh Cleeland sees his chance and spears through to score ten metres to the right of the northern goal posts.

Coach Matterson made it abundantly clear to the Jets players at half-time that they were not giving the Bears the respect they deserved.

Newtown trailed 6-4 after having had a stiff breeze at their backs.

The Jets had to step up, show more hunger for victory and more urgency.

Newtown had not taken full advantage of the Bears having a man sin-binned.

The first half had been one of missed opportunities given the surplus of possession that Newtown had.

The Jets had three times as many plays with the ball inside Norths 20 as Norths had at Newtown’s end.

Ends in a try to winger Abbas Miski in the right-hand northern corner.

Try not converted from wide out, Norths lead 10-4 after 53 mins.

Fa’amanu Brown converts from wide out kicking into the wind.

10-all with twenty minutes to play.

It’s a tense struggle with so much at stake for both teams.

70th min: Penalty to the Jets after repeated sets at Norths end but unable to break through.

Fa’amanu Brown kicks a penalty goal from 15 metres out, 5 metres to the right of the posts.

74th min: Jets give a penalty inside their own 20.

Bears kick the penalty goal (Eli Levido) and it’s 12-all.

Seven tackle set to the Jets but they lose the ball on the first tackle 40 metres out from their own line.

38th min: Bears miss another field goal attempt; McIlwrick’s inspired attempt to charge down the kicker put the Bears kicker off his aim.

Jets make better use of seven-tackle set this time.

39th Minute: Newtown’s own attempt at a field-goal shot is thwarted, but Arana Taumata carries the ball to the right, kicks into the south-western corner and Jacob Gagan seizes the bouncing ball to score.

Try not converted from wide out.

Match penalties were 9-5 to Newtown.

Bears made 8 errors to Newtown’s 3.

Newtown had 172 plays with the ball compared to Norths’ 146.

Despite Newtown’s greater share of possession, Norths ran more metres than the Jets.

This was a desperately near thing (yet again) for Newtown and some commentators were saying that the better team might have lost.