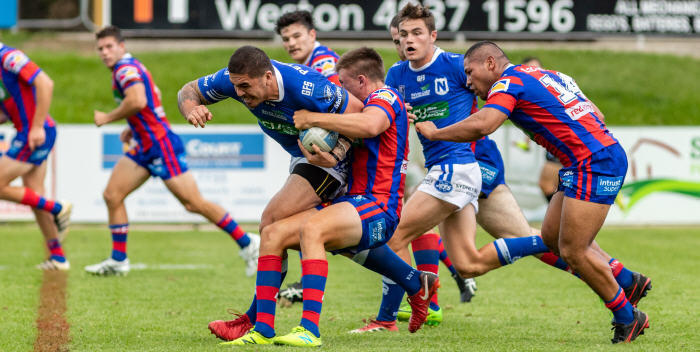 Jets run riot against the Knights

The Newtown Jets ran up their biggest winning margin in recent years when they defeated the Newcastle Knights 58-4 at the Cessnock Sports Ground on Saturday afternoon. The Jets scored eleven tries to one with the Knights only try coming in the shadow of fulltime.

Newtown scored four tries in the first twenty minutes and looked to be in control with a 30-0 lead at halftime. The Jets had nearly 70% of possession in the first half and completed 15 out of 16 sets. Coach Greg Matterson was also pleased with Newtown’s on-line defence in both halves, especially in the first half when the Knights had five consecutive sets of possession right on the Jets’ try-line.

Newtown’s forwards dominated their opponents while hooker Blayke Brailey and halves Kyle Flanagan and Jack Williams made midfield breaks and provided good service to their outside backs. The Knights had no answer to Newtown’s quick passing and keen support play.

The Newtown Jets take on Canterbury-Bankstown at Belmore Sports Ground next Saturday, 21st April. This match will be televised live on Channel Nine and kicks off at 1.00pm.

They had a bye in the Ron Massey Cup competition, but were drawn for another knock-out round in the 2018 NSWRL Challenge Cup.

Apparently things became a bit willing in the third quarter!

Glebe-Burwood now advance into the next round of the Challenge Cup.