Again this year, after many successful relationships with sponsors, the Newtown RLFC invites businesses in the local and wider community to consider a sponsorship of the Jets.

The value of a Jets Sponsorship

We'd like you to consider some of the reasons why your business can gain
through an association with the Newtown Jets.

1.  We're a successful Club celebrating over 111 years of rugby league

We start 2019 with our Season Launch at Petersham RSL.

Our club, a foundation club and in the 5th year of its arrangement with the Cronulla Sharks, will field a very strong team in the 2019 CANTERBURY CUP NSW.

2.  We're a Club with a unique following

The Jets' target market is the local community and rugby league supporters in particular. We are very popular with the large inner-city market. Secondary markets include the Cronulla Sharks organisation and their supporter base. Newtown’s merchandise brand is well-known and the Jets shop has its own website, Jets Clothing.

4.  We support our sponsors through targeted promotions

The Club and its sponsors are also promoted via targeted campaigns using special events, such as the annual Season Launch, golf days and special fund-raising events.

Cross-promotional opportunities will largely stem from communication with existing sponsors and the club's supporter/member database.

The Jets have an email newsletter service that reaches thousands of readers each weekand a Twitter stream that is accessed by hundreds every day.

Your organisation can build on its brand presence across Australia in association with the Newtown Jets RLFC. Sponsoring the Newtown RLFC will allow you to enhance your profile and further develop your relationships with local business and consumers.

Share in the heritage of Sydney's oldest rugby league club and the continuing growth of rugby league.

Newtown RLFC has a range of sponsorship options, from our Jet Set Lounge hospitality package or VIP sponsorship, to corporate sponsorships of the club and team.

If you want to be involved with the Jets but do not wish to purchase a sponsorship package, think about gaining exposure for your business through home game advertising.

Contact the Newtown Jets to discuss a Jets sponsorship option for your business. 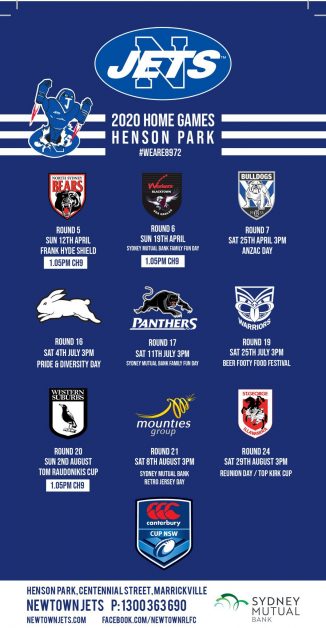