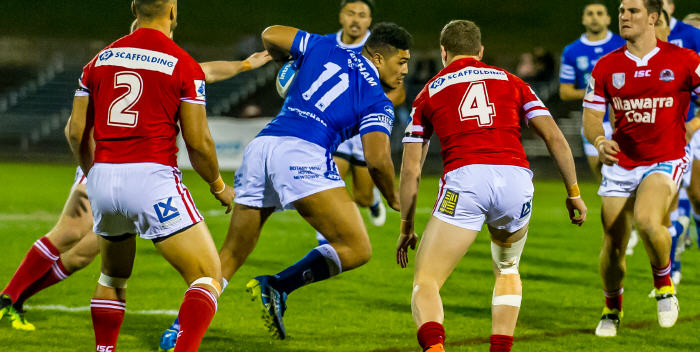 Newtown front-rower Malakai Houma (wearing number 11) has been one of the Jets’ most consistent forwards this season. Photo: Gary Sutherland Photography.

Cometh the hour, cometh the men ….

The Jets go into Saturday’s match against Wyong as underdogs but that is when this old club is traditionally at its best.

This might be a slight tweaking of the old saying, but it is definitely applicable to Newtown’s Round 18 ISP NSW match against the Wyong Roos at Henson Park on Saturday, 9th July.

Newtown is confronted with the usual run of mid-winter injuries, plus our NRL partners the Cronulla Sharks have five representatives in the upcoming State of Origin III next Wednesday night at ANZ Stadium.

Long-time Jets fans will remember many occasions over the years when the odds have been well and truly stacked against their team, but the boys in the Royal Blue jerseys have responded to adversity in splendid fashion.

We call on Jets fans to get along to Henson Park in big numbers on Saturday and give our boys all the support you can muster.

This Saturday’s match at Henson Park is being broadcast live on www.steelesports.com.au

Congratulations to these four Cronulla Sharks NRL squad members who have been playing so whole-heartedly for the Newtown Jets in recent weeks, and who have been named in the Sharks NRL team to play the Penrith Panthers on Sunday: Fa’amanu Brown, Matt McIlwrick, Jesse Sene-Lefao and Kurt Capewell. The best wishes of everyone at the Jets are with you all for Sunday.

Here is the ISP NSW competition table after 17 rounds:  http://www.nswrl.com.au/intrust-super-premiership-nsw/ladder1.html

Our best thoughts go out to Brendan Hikaka who made his ISP NSW debut with Newtown last Friday night against the Illawarra Cutters. Brendan had the misfortune to suffer a severe facial injury which required surgery. We have been advised he is making very good progress following the surgery and everyone at the Newtown RLFC extends best wishes to Brendan and his family.

He is a product of the Thirroul Butchers RLFC.

He is an Australian Schoolboys representative

A product of Wagga Kangaroos RLFC in Group Nine.

You don’t often see night time fixtures at Henson Park but our photographers were all there to capture these moments from the Jets-Illawarra Cutters match: –

There will be the full array of family attractions at Henson Park tomorrow on the Hardi Aged Care Family Hill. There be jumping castles, face painting, pass the ball, a Mr Whippy van & coffee barista service, and the ever-mysterious Jetman.