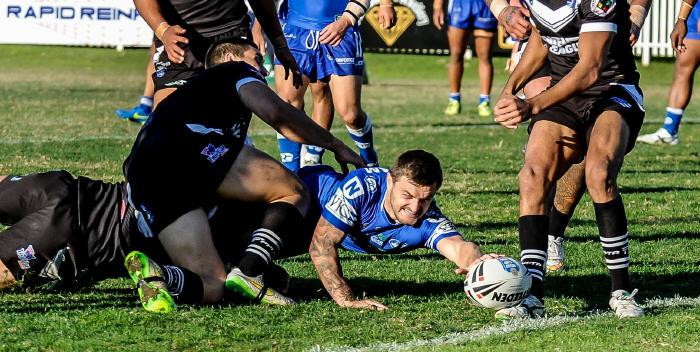 Report on the 11th Round VB NSW Cup match between Newtown and Wentworthville, played at Ringrose Park on Sunday, 24th May 2015 by Glen ‘Bumper’ Dwyer.

The Newtown Jets were put under considerable pressure early in their match against Wentworthville last Sunday. The Jets defence held firm and they then dominated their opponents for most of the first half in running up a 20-0 halftime lead. The second half was a somewhat dour struggle and the Jets were restricted to one converted try. Newtown was never really in danger of surrendering their lead as they went on to win this game by 26-12.

Wenty had come into this 11th round NSW Cup match on a high after their 48-6 demolition of the third-placed New Zealand Warriors at Pirtek Stadium on the previous weekend. Newtown had lost narrowly to Canterbury-Bankstown in the 10th round and came to Ringrose Park needing to win to stay in the top eight. Wentworthville’s trump card from the win against the Warriors, the livewire halfback Chris Sandow, had been recalled to NRL duties while Newtown had more Cronulla Sharks NRL squad members listed on their team-sheet than the previous weekend.

The Jets started tentatively and failed to complete any of their first five sets. They were under pressure from Wenty for the first ten minutes but their defensive line stayed solid. Once Newtown gained some possession and worthwhile field position they began to assert themselves. Experienced centre Mitch Brown scored in the 19th minute after Nathan Gardner had made a determined 25 metre run from dummy-half. Six minutes later Junior Roqica ran off a cleverly-delayed pass from Todd Murphy to score at the southern end, and Gardner’s conversion made it 10-0. The Jets were in again five minutes later when Dallas Wells grubber-kicked ahead, regathered and sent a slick inside pass to hooker Pat Politoni who scored under the posts. Gardner’s conversion gave Newtown a 16-0 lead. Big Saulala Houma was ripping into the Wenty forwards and his charge and offload to Dallas Wells saw the five-eighth cross wide out. Gardner’s conversion attempt hit the upright and the scored remained 20-0 in Newtown’s favour. Gardner went desperately close to claiming a try for himself two minutes out from the halftime siren.

The second half was more of a meat-grinder as Wenty tried hard to get back into the game but were well contained by the Newtown defence. The Jets had some extended possession at Wentworthville’s end but were unable to add to their points tally. Wenty finally broke through to score in the 68th minute and the conversion narrowed the margin to 20-6. The Jets sealed the result when centre Sami Sauiluma sent Daniel Abou-Sleiman over in the north-western corner, and Gardner’s conversion from the touchline took Newtown’s lead to 26-6 with eight minutes to play. Wenty scored a converted try in the last minute of the game to make Newtown’s final winning margin 26-12.

Newtown hooker and Tongan international Pat Politoni played his best game of the season with good service from dummy-half and some incisive running. Andrew Pearn continued his good form and Junior Roqica made a successful return from injury, proving to be a real handful for Wenty in the first half. Mitch Brown and Sami Sauiluma were very solid in the centres and the halves Todd Murphy and Dallas Wells had improved games.

The Jets have a bye this coming weekend (30th and 31st May), and can freshen up for their much-awaited match with the in-form Wyong Roos. This game is part of the NSW Rugby League’s Country Roads promotional program, where a full round of NSW Cup competition fixtures are to be played in NSW regional centres. The Jets will play Wyong at Olympic Park, Muswellbrook on Saturday, 6th June with this match set down for a 2.45pm kick-off.