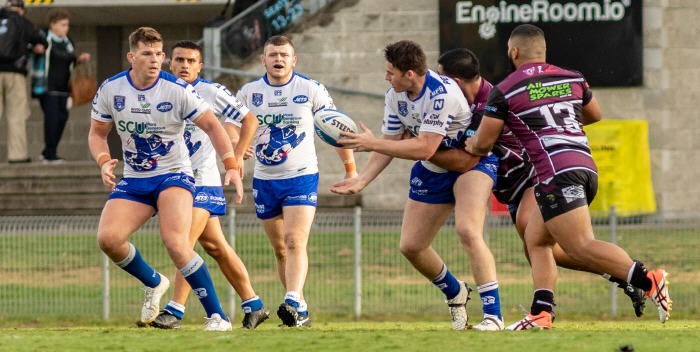 The Newtown Jets went down 24-12 to Blacktown Workers Sea Eagles in the trial match played at Shark Park last Saturday evening (23rd February). The score-line didn’t cause Jets head coach Greg Matterson too much concern, as he pointed out that the Sea Eagles had scored four tries to three and their better goal-kicking had extended the winning margin.

Heavy rain had fallen in the first half and the Sea Eagles took advantage of a couple of Jets handling errors at their own end of the field. Wes Lolo and Siosifa Talakai were two of Newtown’s best forwards while Ben Jones and Matt Evans played well in the backs. Wingers Tyrone Taukamo (ex-Souths juniors and GPS Rugby) and Jiuta Wainiqolo (Fijian Rugby) looked impressive when in possession.

The Sea Eagles led 18-12 at half-time and added the one converted try in the second half. Halfback Ben Jones, centre Matt Evans and second-rower Siosifa Talakai were invited by the Sharks coaching staff to play in the NRL trial match against Manly-Warringah, and all three had field time in the final quarter of the NRL match. Cronulla-Sutherland won this match 28-22.

Newtown’s third and final trial game is against the Newcastle Knights next Saturday, 2nd March, at the newly refurbished Maitland Sportsground at 3.15pm.

Details of Newtown’s next trial:

The Newtown RLFC regrets to advise the passing of former player Frank Puddick, who died on 19th February. Frank played with Newtown between 1965 and 1968. The Newtown RLFC extends sincere condolences to his family and friends.