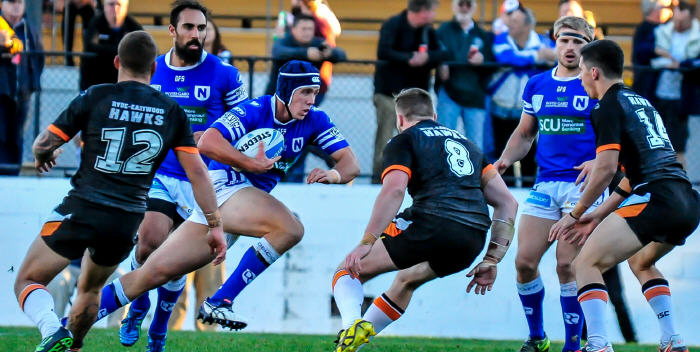 There was a big crowd and plenty of media presence at Leichhardt Oval on Saturday afternoon, but Wests Tigers made the second half their own

Details of the 20th Round ISP NSW match between Wests Tigers and Newtown, played at Leichhardt Oval on Saturday, 23rd July 2016 by Glen ‘Bumper’ Dwyer.

Newtown’s team on Saturday afternoon was:

And Wests Tigers fielded this team:

The star attraction of the afternoon was the inclusion of State of Origin hooker Robbie Farah in the Wests Tigers team, which helped draw an estimated crowd of 3000 and plenty of media attention. A highlight of the afternoon was the vociferous chanting of support for Farah and the hundreds who mobbed him on the field at fulltime. One Newtown official described the afternoon as being an almost surreal experience – the events of the day seemed to take on a life-force of their own and that it was hard to imagine similar events occurring on such a scale again in the ISP NSW competition.

Joshua Tuilagi from the Cronulla Sharks NYC team was on debut for Newtown. Mitch Brown was a late withdrawal from the Jets team. He has been cleared to join the Leigh RLFC in the UK Kingstone Press Championship and everyone at the Newtown RLFC extends good wishes to Mitch for the future, and we thank him for his sterling performances and onfield leadership over the past two seasons.

Other ISP NSW results this weekend:

Newcastle Knights and Penrith had byes.

Wests Tigers kicked off, with Newtown defending the northern end of the ground.

Wests Tigers receive a penalty in the second minute.

Farah sets up an early sortie by the Tigers.

Josh Cleeland’s kick hits the goal-post and is brilliantly scooped up by Jesse Sene-Lefao who scores. (8th min)

Matt McIlwrick had been prominent in the lead-up to the try.

Penalty to Newtown in 10th min.

Jordan Drew sends Jesse Sene-Lefao in to score in the 12th min.

Kurt Capewell converts from the sideline. Newtown 12-0 after 14 mins.

Jets forced into a goal-line drop-out.

Farah sends Tyler Cassel in to score in 19th min.

Jets finding it hard to get out of their own half.

Farah puts Littlejohn over to score in 23rd min.

WT receive a run of penalties, Jets really under the cosh.

Jordan Grant scores next to posts in 32nd min.

Jets finally get into WT territory.

Anthony Moraitis runs the ball on the last tackle and scores wide out. (36th min).

WT kick out on the full.

Two penalties in a row to Newtown.

Crowd gives both teams an ovation as they leave the field.

Newtown kicks off to the northern end.

Jets defence has been strong given the paucity of ball they had in the first forty minutes.

Jets had one set of possession in one twenty-minute period in the first half.

Will the Jets have much petrol left in the tank as the second half progresses?

Jets guilty of obstruction on the first tackle.

Hunt scores in 48th min and converts his own try.

WT make a break up the middle and Addo-Carr scores in 50th min.

Farah was involved in this try.

Penalty to Jets and they are on the attack.

They gain a repeat set in 57th min.

Jets right on WT line, but Addo-Carr intercepts a pushed Jets pass and sprints 95 metres to score under the posts.

Weight of possession and tackling workload starting to tell on the Jets.

Farah puts Sironen in to score in 67th min.

The game has been played at a fast pace.

This is almost certainly the biggest crowd seen at a Leichhardt Oval NSW Cup/IPS NSW competition match outside of semi-final double-headers.

Farah’s influence on his new team-mates, Newtown’s enormous tackling workload and errors have all been major factors in the outcome of this match.

Melbourne Storm-bound Josh Addo-Carr is a dangerous attacking weapon. He is the grandson of the popular 1980’s boxing identity Wally “Wait a While” Carr, and is said to be one of the fastest players in the entire NRL ranks.

Farah puts a kick into the Newtown in-goal right on full-time but the ball is knocked dead.

Farah is mobbed by a huge crowd of emotional WT supporters at full-time. Quite a number of pro-Farah banners have been brandished at Leichhardt Oval on the day.

The big crowd, media hype and the controversial nature of Farah’s inclusion in the WT team undoubtedly boosted WT’s will to win on the day.