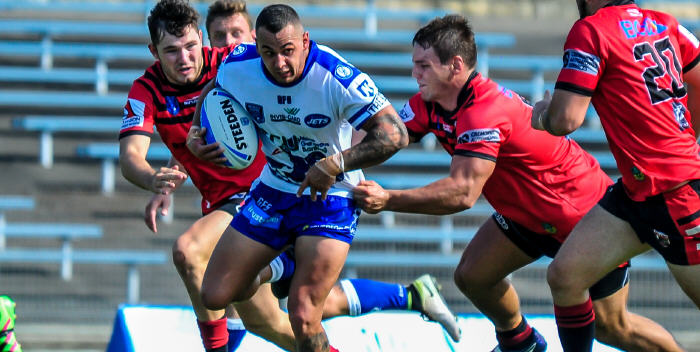 Newtown Jets centre Saxon Onur is about to be rounded up by these North Sydney Bears defenders at Henson Park last Saturday. Photo: Gary Sutherland Photography

Torrid Going for the Jets in First Trial Match

The Newtown Jets defied the stifling heat and their North Sydney opponents in last Saturday’s Intrust Super Premiership trial match at Henson Park. The match was played in temperatures of around 38 degrees and in high humidity.

The North Sydney Bears looked to be well in control at half-time when they led 24-10. With more reserve players on their bench, the Bears were well-placed to run away with the game. The Jets restricted Norths to one converted try early in the fourth quarter and then scored themselves with five minutes left to play. Norths prevailed on the day by 30-16.

Jets coach Greg Matterson said he was pleased with Newtown’s defensive effort in the second half. North Sydney had brought 28 players to this trial, while Newtown only had 19 men available. Two Jets pre-season squad members played with the Cronulla Sharks in the Auckland NRL Nines tournament, while several others  were on duty with the Sharks in a trial match on Saturday night at Redcliffe against the Brisbane Broncos.

Matterson noted that while the full-time score in the first trial match isn’t of great consequence, what is important is how players trialling for a place in Newtown’s 2017 squad perform with the ball, in defence and in communicating with their team-mates. Newtown’s first half completion rate had been less than fifty per cent and there had been some poor reads in defence which led to North Sydney tries.

The Jets fought their way back into the contest in the second half and the four quarters provided plenty of game-time for the young Newtown squad members to stake their selection claims. Backrower Jayden McDonogh, previously with the Sharks Holden Cup team, made an impressive debut while Jason Schirnack provided leadership and tough defence. Alec Bush (ex-Parramatta) played well at hooker, and front-rowers Khalid Deeb (making a comeback) and Tepatasi Fuifava (ex-Sharks) worked hard in the oppressive conditions.

Newtown’s next trial match is against the Canberra Raiders partnership club, Mounties, at Henson Park next Saturday, 11th February, at 6.00pm.

No points scored in the third quarter.