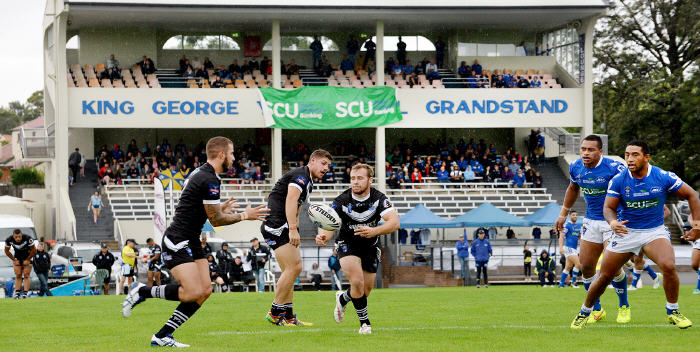 Improved showing by the Jets despite wet conditions

Report on the 5th Round VB NSW Cup match between Newtown and Wentworthville, played at Henson Park on Saturday, 4th April 2015.

Late changes led to Newtown fielding a reshuffled line-up in the NSW Cup match played between the Jets and Wentworthville at Henson Park on Saturday. Halfback Todd Murphy withdrew through injury and backrower Tinirau Arona received a late call-up into the Cronulla Sharks NRL team. The Jets handled the wet weather effectively to run out winners by 30-18, after having led 14-6 at the break.

Jets five-eighth Dallas Wells was the standout player on the day and indicated his personal performance benchmark for the match with a superb cut-out pass that sent experienced winger Mitch Brown in to score in the fifth minute. The Jets made some elementary errors early in the game and two penalties in a row put Wentworthville right on the attack at Newtown’s end. The Magpies dominated possession in the first quarter but they didn’t score their first try until the 23rd minute.

Newtown gained some ball and quick passes and clever footwork by Dallas Wells saw the Sharks Holden Cup graduate score in the 29th minute. Nathan Gardner’s conversion extended Newtown’s lead to 10-6. Wells was once again involved when he kicked ahead cleverly for centre Sami Sauiluma to regather and score. The Jets went in to the halftime break with a 14-6 lead as well as a 95 per cent completions rate, a remarkable figure given the wet and slippery conditions.

Coach Greg Matterson emphasised to his players at halftime that on-field discipline and dominating possession were key elements of wet weather football. This advice seemed to be disregarded on the resumption of play, with Newtown conceding two quick penalties plus allowing their opponents to stand and off-load in tackles. Wenty made good use of the ball and scored an unconverted try in the 45th minute. Wells was turning on a virtuoso performance and his killer short pass in the 50th minute sent backrower Patrice Siolo racing through a defensive gap to score at the scoreboard end. Mitch Brown claimed his second try in the 57th minute after the Jets forwards had made good ground up the middle. Nathan Gardner’s conversion from the sideline gave Newtown a 26-10 lead. Gardner then scored a try in the 65th minute after some quality ball movement on the Jets’ left side attack, giving Newtown a strong 30-10 points advantage.

The final ten minutes was probably Newtown’s least impressive of the game, as Wenty scored two tries to narrow the gap to 30-18. One try was a barging effort from close range and the Magpies’ final try was due to some average defence on Newtown’s right hand side. The Jets maintained their high completions rate right throughout the match and finished ahead in the penalties 10-6.

Coach Matterson commended Dallas Wells at fulltime for what had been an exceptional performance in difficult playing conditions. The coaching staff were pleased with this home ground win but were less impressed with the lapse in defensive effort in the final ten minutes. Dallas Wells, Blake Ayshford and Mitch Brown had been the best of the backs. The forwards worked well as a pack and their overall defensive performance had improved, especially against tough physical opposition like Wentworthville. The Newtown club extended congratulations to the Wenty and Parramatta forward Richie Fa’aoso on his successful playing comeback from serious injury.

Next Sunday, 12th April, is the first leg of the 2015 Frank Hyde Shield series. This 6th round NSW Cup match between fellow 1908 foundation clubs North Sydney and Newtown gets underway at North Sydney Oval at 3.00pm.